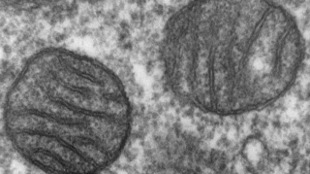 Ten years ago, molecular biologist Darwin Prockop and his team at Texas A&M University observed something unexpected in a coculture of human mesenchymal stem cells (MSCs) and the damaged rat cells they were meant to rescue. The rat cells, the researchers found, consistently contained human mitochondrial DNA.

Although somewhat surprising, it made sense that an infusion of mitochondria could bring a damaged cell back to health. After all, mitochondria are the “powerhouse” organelles that produce cellular energy currency called ATP and “mop up” reactive oxygen species that can wreak havoc in a cell if left unchecked, Prockop said. Mitochondria are also sensitive to changes in the cellular environment, and are among the first organelles to be damaged under stressful conditions, like low oxygen levels or rapid reperfusion following a shock such as a heart attack. Damaged mitochondria can quickly become drivers of apoptosis.

“It’s the sort of thing where if you don’t look for it, you don’t see it,” said Prockop.

Now, a decade and dozens of studies later, researchers are still examining intercellular mitochondrial transfer, with an eye toward how best to exploit the process to rescue tissues damaged by stress-related events like ischemia and inflammation. Scientists are also working to answer a litany of questions about what makes the transfer possible and the role this phenomenon plays in MSC-mediated tissue repair.

“The basic mechanisms are not really clear,” said Jahar Bhattacharya, who studies cellular physiology at Columbia University and coauthored a 2012 Nature Medicine study that demonstrated mitochondrial transfer from human MSCs to mouse cells in vivo. His group found that bone marrow-derived murine and human MSCs could transfer mitochondria to damaged lung epithelial cells in a mouse model of acute lung injury, restoring organ function and improving the animals’ survival. Bhattacharya’s team observed the MSCs forming attachments to the alveolar walls and forming nanotubes and microvesicles to shuttle the mitochondria between cells.

Bhattacharya said he was surprised to find that, in healthy mice, mitrochondrial donor MSCs migrated through the lungs without forming such attachments, suggesting that cell damage may play a role in directing the organelle delivery process.

Other groups have also found evidence that this may be the case. Last year, researchers at the Qilu Hospital of Shandong University in China reported in Microvascular Research that human MSCs cocultured with human umbilical cord epithelial cells (HUVECs) formed tunneling nanotubes and delivered mitochondria to the HUVECs more frequently when the receiving cells were damaged through oxygen and glucose deprivation and reperfusion. And in January, cell biologist Xiang Wang of the University of Bergen in Norway and his colleague showed in Cell Death & Differentiation that rat neuronal cells damaged by ultraviolet light formed their own actin-containing nanotubes, and that these structures were required for healthy neighboring cells to deliver fresh mitochondria and effectively save the damaged cells. Wang’s group is now working to identify the specific signals that drive this process. “At this point we don’t know how this is happening,” he told The Scientist.

Bhattacharya said it is clear that the transfer must be an active process because, at 1 micron in diameter, an organelle as large as a mitochondrion would have no chance of passively entering a cell. “A micron is a big number when you’re really close up to a cell,” he said.

Although cellular uptake of donor mitochondria is largely a mystery, Bhattacharya’s group has shown that it can be halted using drugs that block endocytosis. A protein called Miro1 has also recently been implicated in the process. Miro1 is a Rho-GTPase that seems to carry mitochondria along an actin “highway” within tunneling nanotubes. In The EMBO Journal study published last year, scientists from the CSIR-Institute of Genomics and Integrative Biology in Delhi, India, and their colleagues showed, using mouse and human cells, that overexpression of Miro1 enhanced MSCs’ abilities to donate mitochondria and to rescue damaged epithelial cells in vitro as well as in a mouse model of airway inflammation.

As the details continue to be worked out, some groups are already applying what’s known about mitochondrial transfer to clinical questions. Mitochondrial delivery by MSCs from Wharton’s jelly harvested from umbilical cords was recently found to restore the function of cells lacking their own mitochondrial DNA. This suggests that the process may be useful for treating mitochondrial defects. MSC-mediated mitochondrial delivery has also been used to repair damage caused by cigarette smoke in mice, according to a 2014 American Journal of Respiratory Cell and Molecular Biology paper.

While the role of mitochondria in that process—if any—is not yet known, MSC-based therapy for lung damage is set to be tested in a Phase 1 clinical trial. Some scientists, like Prockop, say such trials are premature. “The whole field of MSC is [getting] ahead of itself,” he said. Of the thousands of studies showing promising effects of MSCs on damaged tissues in animal models, Prockop added, “transferring mitochondria would explain a lot of the data.”

Other researchers are bypassing MSCs altogether and delivering mitochondria alone to damaged tissues. James McCully, who studies cardiac surgery at Boston Children’s Hospital, favors this approach because it circumvents the unknown effects of delivering entire MSCs and because it takes less time to isolate the organelles than to grow stem cells for therapeutic use. Three years ago, his group has showed in the American Journal of Physiology-Heart and Circulatory Physiology that naked mitochondria injected into an oxygen-deprived rabbit heart just before reperfusion protected cardiomyocytes from damage and improved heart function a month later.

Some scientists are skeptical as to whether cells can accept free mitochondria. Prockop said he has tried to deliver free mitochondria to recipient cells without success, but noted that “somebody else may have different conditions.”

McCully said that, in his lab’s hands, several cell types can and do receive naked mitochondria, and that HeLa cells can retain them for up to 50 passages. “There’s no magic to it whatsoever,” he said.

His group recently described some of the details of the process; according to a paper published in Biology Open in May, the researchers found that, as with MSC-delivered mitochondria, internalization of naked mitochondria was dependent on actin-mediated endocytosis. They also found that rescue of damaged cells by naked mitochondria occurred through increasing ATP levels and oxygen consumption by rescued cells.

McCully’s team is now optimizing a method to rapidly harvest mitochondria and deliver them into ischemic pig hearts just before reperfusion, with the goal of getting a streamlined process into clinical trials.

In the meantime, Wang, Bhattacharya, and others continue trying to understand the basics of intercellular mitochondria transfer, such as which molecular signals donor mitochondria interpret to rescue cells, how the organelles survive in previously mitochondria-deficient cells, and the extent to which mitochondrial sharing may be involved in normal tissue repair.