Eleven babies have been given an experimental treatment to repair damaged heart tissue: 1 billion of their own mitochondria infused into the impaired cardiac muscle. So far, The New York Times reports, eight babies have survived and their hearts are working better; in comparison, 65 percent of similar babies who don’t receive the treatment die and none experience an improvement in their cardiac function.

“They gave her a fighting chance,” Kate Bowen, the mother of one of the babies who was treated, tells The Times. Her daughter Georgia went into cardiac arrest after birth and was kept alive with a machine that operated her lungs and heart. She can now breathe on her own, although her heart has not fully recovered.

Mitochondrial transplants come from the patients’ own healthy cells in another part of the body. They are then isolated and delivered to the heart.

Doctors who developed the technique tried it out on the first baby in 2015. The newborn had suffered heart damage during a surgery to repair a congenital defect in the heart. Within two days, The Times reports, the baby’s heart was beating normally. “It was amazing,” Sitaram Emani, the pediatric surgeon at Boston Children’s Hospital who performed the operation, tells the newspaper.

The procedure is “a really intriguing option” to test out in adults, Peter Smith, chief of cardiothoracic surgery at Duke University, tells The Times. Experiments in adults are being planned. 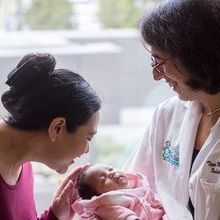