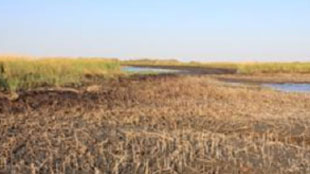 Two years after the Louisiana coastline was coated by crude oil released from the broken Deepwater Horizon oil rig, much of the 75 kilometres of affected salt marshes has recovered, but some areas that were already degraded by human activities have been irrevocably lost. The report, published today in the Proceedings of the National Academy of Sciences, is thus cause for both optimism and concern.

“It would be premature to conclude that the oil-impacted marshes are out of the proverbial woods yet,” said Christopher D'Elia, dean of the School of the Coast and Environment at Louisiana State University.

Salt marshes protect the land and sea from each other. They shelter the shoreline from eroding waves, while their plants absorb nutrients from inland run-offs that might otherwise cause harmful algal blooms. They also provide nurseries for fish and shellfish. “Louisiana coastal waters usually...

Unfortunately, the marshes are under threat. Even before the BP oilrig sprung a leak in the spring of 2010, pollution and other man-made disturbances were destroying a football field’s worth of wetlands every hour.

In October 2010, 5 months after the oil reached Louisiana, Silliman surveyed three affected sites at Barataria Bay, one of the most heavily contaminated areas. Tall grasses prevented the spill from reaching beyond 15 metres of the shoreline but at the edge of the marsh, up to 82 percent of the local vegetation was smothered by oil. “It looked like a thick, black belt alone the shoreline,” said Silliman.

The oiled zone contained dead and flattened grass, piles of snail corpses, and empty mussel shells. Below ground, around 95 percent of plant roots were dead.

When Silliman’s team revisited the same sites in April 2011, the marshes had started to bounce back. Plant cover in the barren areas had increased by around 20 percent. The grasses from the unaffected areas had sent roots into the dead zones, and had started to repopulate them.

Silliman expected the quick recovery. “Salt marsh theory holds that marsh grasses are resilient to oil coverage and will bounce back in a few years from being covered with oil,” he said.  By January 2012, much of the marshland had completely recovered.

But not all areas were so lucky. In places where the marsh was already receding, the oil more than doubled the pace of erosion, with the shoreline retreating by 3 meters per year, compared to the usual average rate of 1.4 metres per year.

“The data confirm what other researchers have reported: oiled marshes are subject to enhanced rates of erosion,” said D'Elia.

By killing the local plants, the oil also destroyed the network of roots that binds the soil together. And with no new roots to fill in, the looser sediment was more quickly washed away by incoming wave. “This erosion permanently transforms the marsh into subtidal mudflats and grasses cannot regrow there,” said Silliman.

Silliman said that the study emphasises the need to stop the salt marshes from eroding away under normal conditions. “Most importantly, that includes increasing the supply of silt to these sediment-starved marshes,” he said. In Louisiana, the construction of channels along the Mississippi has robbed the salt marshes of valuable sediment, which they need to prevent erosion.

Whether this report holds true for all of Louisiana’s marshes affected by the oil spill remains to be seen, however. Silliman’s team only studied a small number of sites, D’Elia said, and the damaged zone may extend far deeper into the marshes at other locations.