Their color gave them away. Ecologist Diane Stoecker was looking at plankton in samples of ocean water from the dock in Woods Hole Harbor in Massachusetts some 40 years ago when she spotted something strange. Under the microscope, she recognized Laboea strobila, shaped like an ice-cream cone—“yellowish green and very beautiful,” she recalls—and the smaller, more spherical Strombidium species—also oddly greenish.

Stoecker knew that these single-celled critters, named ciliates for the hairlike cilia that they bear, got their energy by feeding on other, smaller organisms. So why were the ones she saw so green—a color that generally signifies photosynthesis? Was the pigment leftover food, ingested algae or just the algae’s chloroplasts?

After some groundbreaking experiments, Stoecker was one of the first scientists to describe how these types of plankton not only hunted their prey, but also sequestered the chloroplasts of their food sources and used them to get energy from sunlight. “I was very excited to find that they really were photosynthetic,” she says.

Traditionally, marine microplankton had been divided similarly to species on land. You had plant-like phytoplankton, such as algae, and animal-like zooplankton that ate the phytoplankton. What Stoecker found was that some of these organisms were somewhere in the middle: They could eat like animals when food was present and photosynthesize like plants in the light. “If you think about it, it can be the best of both worlds,” says marine ecologist Dave A. Caron of the University of Southern California.

Today, there’s growing realization that these in-between beasties—dubbed mixotrophs—are not only widespread but also play vital roles in the ecology of the oceans.

“They have a competitive advantage,” says dynamic systems modeler Aditee Mitra of Swansea University in Wales. “They have obviously taken over the ocean.”

At first, mixotrophs were considered a rarity of nature and no more than an evolutionary curiosity, but it soon became clear that they were widespread and abundant. In her first samples, Stoecker reported that more than a third of ciliates had chlorophyll in them. With time, more and more planktonic species that were previously considered either phytoplankton or zooplankton came to be recognized as mixotrophs.

Scientists know now that there are myriad mixotrophs in the ocean and they come in all kinds of shapes and sizes, as well as in two main types. There are constitutive mixotrophs, whose own physiology permits production of energy from the sunlight. And there are non-constitutive mixotrophs, like Stoecker’s Strombidium and L. strobila, that must steal photosynthetic organelles from their prey, or keep whole algae hostage within them, in order to do it.

It took a long time for anyone but plankton biologists to be especially interested in mixotrophs, says Stoecker, now at the University of Maryland’s Center for Environmental Science. But in the last decade, as evidence of their abundance and diversity builds up, their pivotal role in the marine ecosystem has become clearer.

In the ocean, the tiny, most abundant bacteria and algae get eaten by bigger organisms like zooplankton. They, in turn, are eaten by bigger organisms such as clams and jellyfish, and up and up. Each “eating” stage represents a level in an ecological pyramid that has the largest—top—predators at the tip. By tracing what eats what, researchers arrive at a complex network called a food web that allows them to understand how biomass is transferred through an ecosystem.

In a free-for-all frenzy, mixotrophs eat algae, animal-like plankton and each other, and are placed in the lower, broad base of food-web pyramids. The importance of their role in the ocean came to light when scientists started including mixotrophy in food web models—simulations of how the food web works under different conditions. What they found is that the survival of bigger organisms depends heavily on mixotrophs.

“It’s basically redefining marine ecology,” says Mitra. “The base of the food web has practically changed.”

Keeping a lid on carbon

From simulations, scientists also have estimated that mixotrophs are a key element of the carbon cycle in the ocean: how carbon is consumed and released through biological and physical processes. Normally, smaller phytoplankton use most of the available inorganic nutrients, like phosphorus and nitrogen, not leaving a lot for bigger plankton. But because of their dual nature, mixotrophs of large sizes are able to thrive even when these nutrients are limited, driving the production of greater quantities of carbon-containing dead matter. 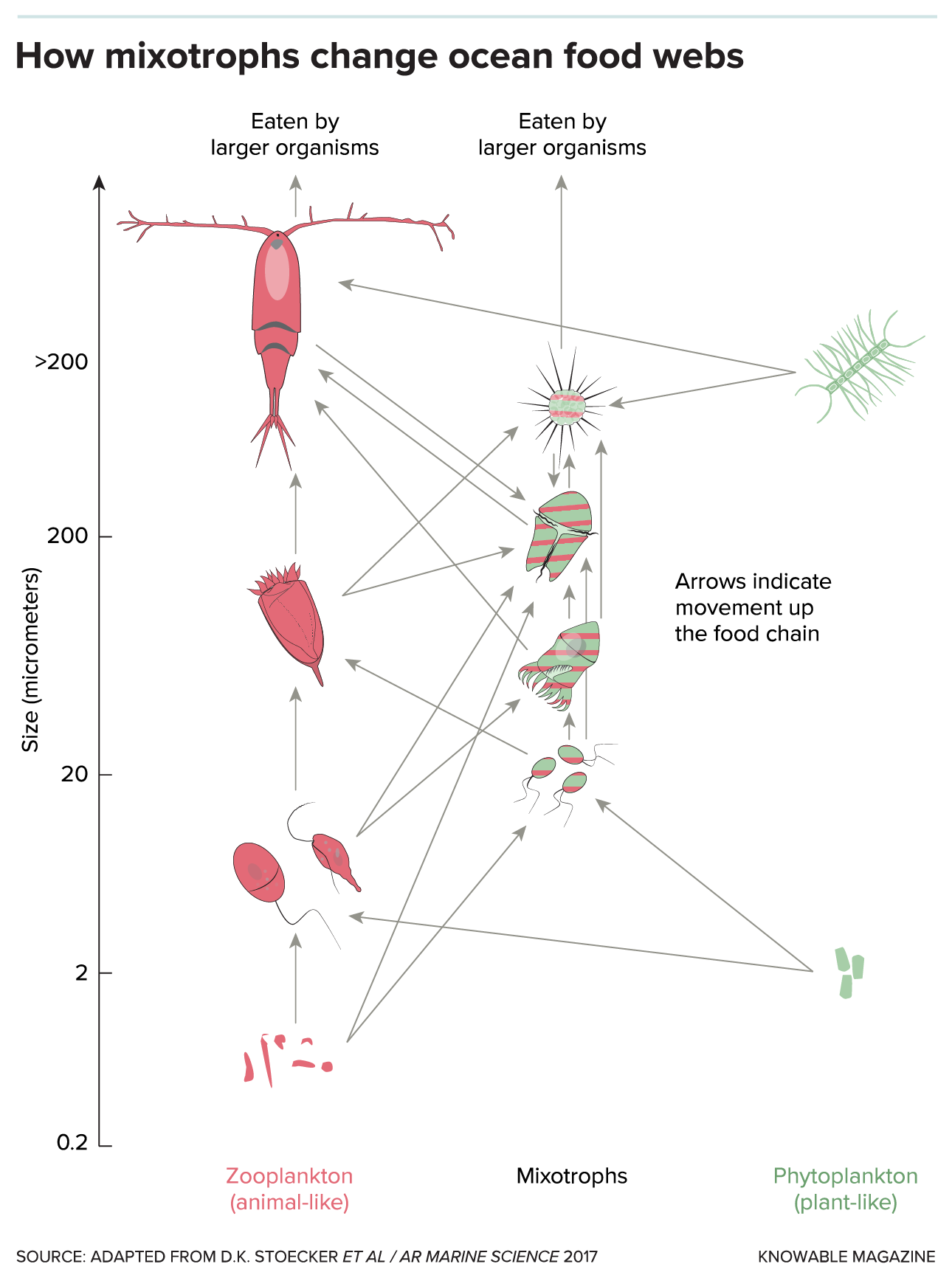 This illustration depicts how an ocean food web works when mixotrophs are factored in. In the ocean, the small usually gets eaten by the big (indicated by the arrows), transferring biomass and carbon up the food web to larger and larger creatures. Zooplankton (left) graze on small organisms, while phytoplankton (right) harvest the energy from sunlight. Mixotrophs (middle) can use both strategies, adding complexity to the planktonic food web.

Since bigger things sink more rapidly to create sediments on the ocean floor, “that can basically lock a lot more carbon away from the atmosphere,” says Ben Ward, a marine plankton ecologist at the University of Southampton in England. Mixotrophs’ ability to photosynthesize sequesters atmospheric carbon, too—so in these two ways, healthy mixotroph populations are crucial for keeping down the amount of carbon dioxide released to the atmosphere. “It’s kind of a twin effect,” says Ward.

Mixotrophs also have more direct effects on our lives. Fifty percent of the oxygen we breathe comes from single-celled organisms in the ocean, and a huge quantity of these are mixotrophic plankton, Mitra says.

And whenever there are harmful algal blooms—organisms of one species taking over and severely lowering the oxygen of an area of water—there is a good chance mixotrophs are involved. Many of the bloom-causing organisms, such as dinoflagellates and raphidophytes, are confirmed mixotrophs. Blooms happen when high levels of nutrients like nitrogen and phosphorus occur in coastal waters, often due to agricultural runoff, and in circumstances like that, mixotrophs have a growth advantage over simpler phytoplankton.

Time for a remix

As much as we know about mixotrophs now, “there’s still a big unknown,” says Stoecker. “In the ocean, in general, we still don’t know how many mixotrophs there are and how active they are.” Researchers are now studying the role mixotrophs play in Arctic regions and in other oceanic conditions.

Scientists are also working on developing new methods to study the creatures’ physiology. But perhaps the biggest task has been reanalyzing species of plankton to check for mixotrophy since, historically, scientists would only classify plankton as plant-like or animal-like. “We were only studying half of it,” says Mitra. “We had to go back and reclassify the whole protist kingdom.” Advances in DNA sequencing technologies are making this endeavor easier, while also resolving the distribution and location of mixotrophs in the global oceans.

Scientists from all disciplines, from plankton biologists to oceanographers, are now interested in mixotrophs, says Ward. Such broad expertise will lead to a far deeper understanding of these versatile plankton, “and that’s what's really important,” he says. The mixotroph strategy seems to mostly be one for small creatures, although some bigger organisms do it—the carnivorous Venus flytrap and a sea slug that can photosynthesize are two flashy examples. Mixotrophy also is far more common in the ocean than on land, and scientists are still not sure why.

But for Mitra, one thing is very clear: “They are the organisms that rule our planet.”

Rodrigo Pérez Ortega is a science writer and intern at Knowable Magazine. You can find him at rodrigoperezortega.com and on Twitter as @rpocisv.

This article originally appeared in Knowable Magazine, an independent journalistic endeavor from Annual Reviews. Sign up for the newsletter.