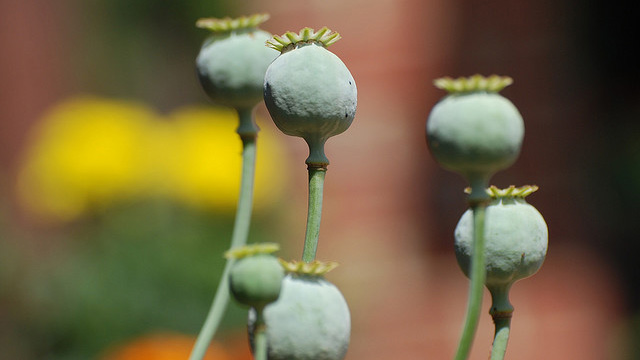 Poppy pods from the plant Papaver somniferum—the source of many opiates, including morphine and codeine. Researchers recently published the high-resolution structures of two of the body's opioid receptors. FLICKR, TRENARREN The mu opioid receptor, the target of opium, may partner with itself when bound to a morphine-like drug.
KOBILKA LAB

The brain’s opioid receptors regulate powerful neurological effects such as sedation, analgesia, depression, and euphoria by serving as the targets of a wide range of endogenous molecules such as endorphins and opiate drugs like morphine, codeine, oxycodone, and heroin. Although their detailed atomic structures have been highly sought after for decades, these cell membrane proteins have long evaded X-ray crystallography—a process that requires them to be purified in high quantities and then crystallized before their structures can be illuminated by X-ray crystallography. Now two independent research teams have produced high-resolution...

In both cases, the trick was to crystallize the receptors while they were bound to stabilizing molecules. Among other things, the structures reveal wide, gaping binding sites, which help explains the “promiscuity” of most opiate drugs, which are often capable of binding multiple types of opiate receptors. Detailed knowledge of the receptors’ binding sites will be useful in developing drugs that treat anxiety, chronic pain, and depression, as well as drug addiction.

Researchers have determined the 3.8-angstrom resolution crystal structure of the human enterovirus 71—an RNA virus member of the picornavirus family that may lead to paralysis and encephalitis in infants and young children. The structure of the virus revealed a small hydrophobic “pocket” molecule that likely becomes exposed prior to the release of genetic material during the infection process. Drugs that target this exposed molecule, the authors suggest, could potentially be effective in neutralizing the virus.

When a ribosome reaches the end of a prematurely truncated or defective mRNA sequence, it becomes stuck. In bacteria, these stalled ribosomes are rescued by transfer-messenger RNA (tmRNA), hybrid molecules that function both as transfer and messenger RNAs. The rescuing process involves an elongation factor called Tu (EF-Tu), which delivers the tmRNA to the site of the ribosome that receives new amino acids for building protein sequences, and the protein SmpB, which latches onto the tmRNA-EF-Tu complex and binds them to the ribosome. By determining the crystal structure of a ribosome from a Gram negative bacterium bound to EF-Tu, SmpB, and a tmRNA fragment, researchers confirmed that the tmRNA complex helps stalled ribosomes become unstuck by filling in for both the anticodon region of tRNA, as well as the truncated mRNA itself. The study also suggests that the complex is able to recognize only stalled ribosomes by sensing the empty spots in the mRNA channel of the ribosome left open by the truncated mRNA molecule.

In a parallel study, a different group of researchers determined the structure of an alternative ribosome-rescuing complex in bacteria that employs a 140-amino acid protein called YaeJ instead of tmRNA. The 3.2-angstrom-resolution structure of the YaeJ system revealed that, like the tmRNA system, YaeJ rescues stalled ribosomes by binding to a partially empty mRNA channel.