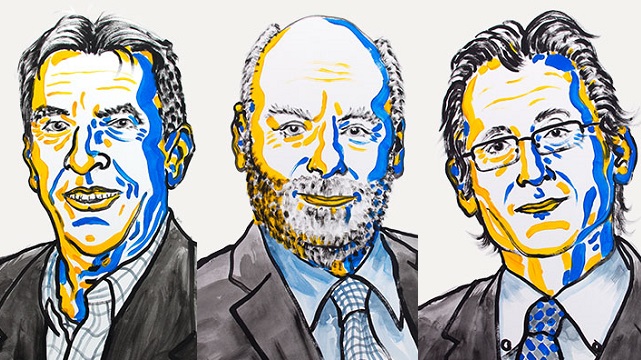 Jean-Pierre Sauvage of the University of Strasbourg, France, J. Fraser Stoddart of Northwestern University in Evanston, Illinois, and Bernard Feringa of the University of Groningen, the Netherlands, have won the 2016 Nobel Prize in Chemistry in recognition of their contributions to the design and synthesis of molecular machines. The three chemists “have taken molecular systems out of equilibrium’s stalemate and into energy-filled states in which their movements can be controlled,” the Nobel Foundation said in its announcement.

“I’m blown away,” Feringa’s collaborator Wesley Browne, an associate professor of molecular inorganic chemistry at the University of Groningen, told The Scientist. “It’s funny because you expect it for years, but you’re still blown away.”

This morning, while Feringa was in his office on the phone with the Nobel Foundation, Browne and colleagues stood...

Feringa had a similar reaction when he saw a molecular machine in action for the first time. “I could hardly believe that it worked,” he said.

Chemists working to develop molecular machines today have their sights set on building responsive materials, dynamic sensors, and nanorobots for energy storage and biomedical applications such as targeted drug delivery.

According to the Nobel Foundation, Sauvage’s pioneering work in the 1980s set the stage for modern molecular machinery. He was the first to successfully synthesize high yields of interlocked molecules, called catenanes, using a revolutionary template-based method. “Sauvage’s great contribution was to realize that the synthesis of such structures could be greatly facilitated by using the preferred coordination geometry of transition-metal ions to assemble and orientate the molecular building blocks,” wrote the University of Manchester’s Guzmán Gil-Ramírez, David Leigh, and Alexander Stephens in a 2015 Angewandte Chemie review.

Sauvage “is the nicest scientist I’ve ever met,” his Strasbourg colleague Joseph Moran, an assistant professor of chemical catalysis, told The Scientist. “I say that not because he won the Nobel Prize,” Moran added. “I would have said that if you asked me yesterday.” As a mentor, Sauvage is “very humble and very encouraging,” said Moran. “He’s the ideal colleague in that sense.”

Omar Farha, a research professor at Northwestern University who collaborated with Stoddart on a study published in Angewandte Chemie this summer (July 21), described the Nobel laureate as a dedicated researcher. During the revision of their manuscript, Farha recalled sitting down with Stoddart and their coauthors to go through the paper, line by line. “That just tells you he takes his science very seriously,” Farha told The Scientist, adding: “I expected him to win this prize for the last few years.”

In the ’90s, Stoddart reported high-yield, template-directed synthesis of interlocked molecules called rotaxanes. “Among his developments based on rotaxanes are a molecular lift, a molecular muscle and a molecule-based computer chip,” the Nobel Foundation noted.

Next came molecular switches and motors. “In the early days of my career, I started building switches,” Feringa told reporters today. “Once we built the switches, we realized we could build rotary motors,” he added. “Once you can control motion, you can control all sorts of dynamic functions. . . . But it all started with a switch.”

Looking ahead, Feringa envisions a number of possible biomedical applications for molecular machines. “It’s a bit early days, of course, but once you are able to control movement, you have a motor, you can think of all kinds of [uses],” he told reporters. “Think about nanomachines, microrobots. Think of tiny robots that the doctor in the future will inject in your blood . . . and [these] go to search for a cancer cell.”

Meantime, said Browne of Groningen, the co-laureates “have shown you can have much more complex systems than organic chemistry can achieve.” This year’s award, he added, “really puts inorganic chemistry back at the center of chemistry.”