The decline in total occupied forest may not equate to an overall loss in butterfly numbers, but scientists are still concerned that their populations are suffering.

While wintering in Mexico, monarch butterflies occupied 53 percent less area this year than last year. The butterfly colonies covered 2.83 hectares of forest in Michoacán and the state of Mexico in the winter of 2019–2020 and 6.05 hectares in the winter of 2018–2019, the country’s National Commission for Protected Natural Areas announced last week (March 12).

“The current reduction in the population of [monarchs] is not alarming, but we must remain vigilant that it is not a trend in the coming years,” Jorge Rickards the general director of World Wildlife Fund Mexico, says in the announcement. He explains that in most winters the butterflies form colonies across roughly three hectares; last year’s expanded occupied area was “atypical” because the insects had better weather conditions to reproduce in the spring of 2018 compared with the spring of 2019.

Rickards also notes that the total number of monarchs appears to be “stable,” as the butterflies clustered together in larger groups, or hangers, than before. Because of this clustering, officials count the butterflies by area rather than individually, according to the Associated Press.

Not everyone is convinced by the claims. The usual coverage area of three hectares has only been consistent since 2010, when there was a drop in forest occupation but little rebound in numbers over the following years, according to a graphic developed by the Center for Biological Diversity (see below). Scientists calculate that the butterflies must cover an overwintering area of six hectares to avoid extinction in North America. This year’s numbers fall way short of that. “Scientists were expecting the count to be down slightly, but this level of decrease is heartbreaking,” Tierra Curry, a senior scientist at the center, says in a statement. 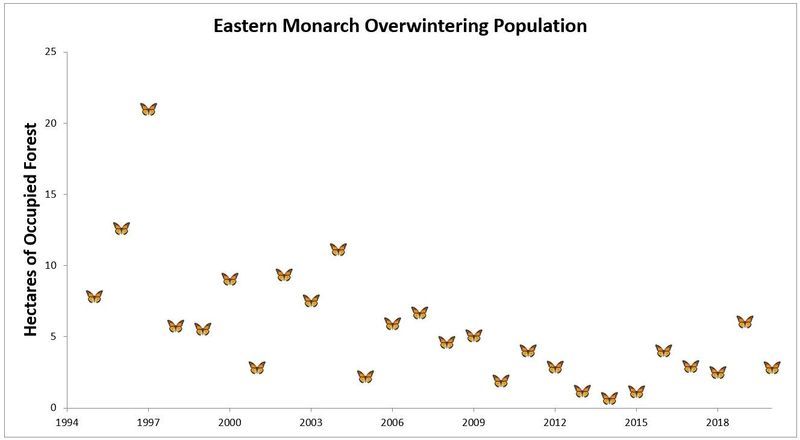 This graphic shows the hectares of land in Mexico covered by monarch butterflies in the 1990s and 2000s.
Tierra Curry/Center for Biological Diversity

Aside from enduring foul mating weather last year, the monarchs have lost more than 66 million hectares of breeding habitat in the US as a result of herbicide use. The chemicals decimate milkweed, which is the only source of food for monarch caterpillars, they are toxic to the caterpillars, and they make the adult butterflies less healthy. Logging in Mexico and crime against environmentalists are other factors that could be affecting the butterfly’s numbers.

Climate change is another concern. “The decline of over 53% of populations in the butterfly reserve is worrisome, above all because of the effects of climate change on the migration route and on the wintering grounds in Mexico,” environmentalist and author Homero Aridjis tells Mexico News Daily. The wintering grounds could become unsuitable for the monarchs by the end of the century, according to the news outlet.

Even still, the outlook for the migration of the butterflies back to the US does not look good. The butterflies have already begun their journey north but there is not enough milkweed in Texas to support the butterflies’ reproductive cycle this spring, Natural Protected Areas Commission Director Gloria Tavera Alonso tells Mexico News Daily. That, she says, is “very worrying.”