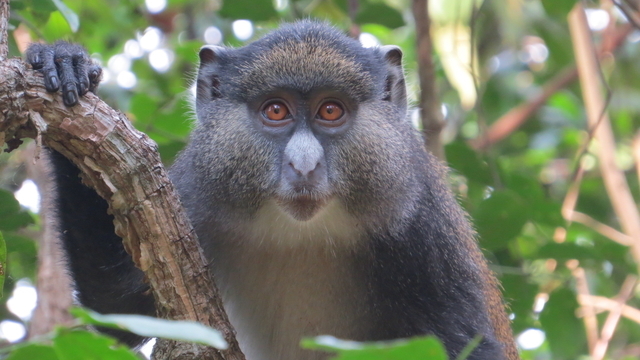 Back in 2004, Kate Detwiler had her binoculars trained on a guenon monkey perched in a tree deep in Tanzania’s Gombe National Park. She was waiting for the monkey to defecate so she could alert her husband and field assistant, James Gray, who was clambering on his hands and knees through the dense undergrowth towards the tree to grab the sample.

Minutes later, Gray quickly reemerged from the thicket, empty-handed and white as a sheet. He had come across a coiled-up forest cobra at the base of the tree and had to beat a hasty retreat. “The cobra was sleeping,” recalls Detwiler, a primatologist at Florida Atlantic University, “and it was just huge.”

Snakes, Gombe’s steep landscape, and competition for samples with enterprising dung beetles are all persistent hazards in Detwiler’s field. She...

Detwiler’s discovery “finally gives us the OK to blow the species concept out of the water,” says Mary Glenn, a primatologist at Humboldt State University who was not involved in the study. 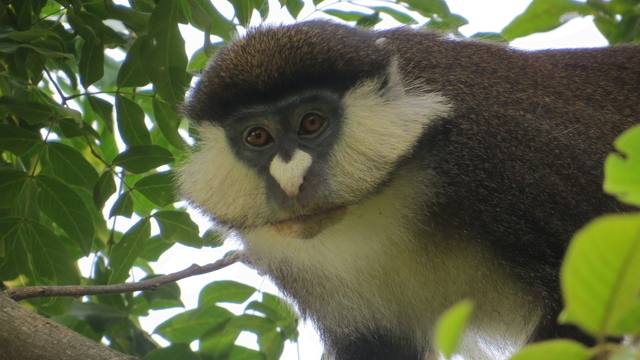 The biological species concept, proposed by Ernst Mayr in the 1940s, defines a species as a group of individuals that can make fertile offspring only with one another, a notion he termed “reproductive isolation.”

But that idea doesn’t jibe with Detwiler’s observations of monkeys in Gombe. By analyzing the mitochondrial DNA from epithelial cells found in 144 monkeys’ poop, she showed that red-tailed guenons (Cercopithecus ascanius) and blue guenons (C. mitis) have been mating and producing hybrid offspring for many generations. Using the sequencing data, she found that all of the monkeys in the park—hybrids, red-tails, and blues alike—can trace their ancestry back to an original group of female red-tailed guenons that mated with male blue guenons that arrived in the park several hundred and possibly even thousands of years ago. They have been mating and producing hybrid offspring, which in turn have mated with one another and with other guenons, since then.

Previous studies of nuclear and mitochondrial DNA determined that red-tailed and blue guenons became separate species more than 3 million years ago, and the two are readily distinguishable by sight. In addition to the source of their name, red-tailed guenons also have striking splashes of white on their noses that make them easily recognizable. Blue monkeys lack the white spots and have dark coats.

Decades ago, scientists became curious about individuals with characteristics of both species— the red-tails’ white spots and the blues’ dark fur. For instance, in 1960, when Jane Goodall arrived in Gombe to begin her famous study of the forest’s resident chimpanzee population, she noticed monkeys that she couldn’t quite identify. “We’re pretty sure those were the hybrids,” says Detwiler. “It’s very visual to an observer.” So while researchers knew that the monkeys were probably hybridizing based on their appearance alone, no one had looked at their DNA to determine how many genes had been shared between the species.

Liliana Cortes-Ortiz, a primatologist at the University of Michigan who was not involved in the study, says in an email to The Scientist that Detwiler’s study “provides a great opportunity to study the hybridization of primate species with relatively high levels of divergence.”

How many species of guenons are in Gombe?

Are organisms like the red-tailed and blue guenons distinct species, subspecies, or a single species, then? “I think we really need to think about the meaning of . . . variation,” especially with the availability of molecular biology techniques to study the genetic differences between species, says Glenn. Hybridization events challenge the idea of discrete species, which may exist on more of a kind of biological “smear” instead. “It’s not a clean continuum.” 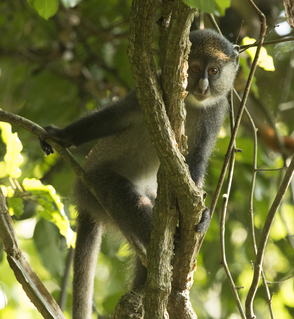 “Tamu,” one of the hybrid infants the researchers are following in the study group in Gombe National ParkMANENO MPONGO/GOMBE HYBRID MONKEY PROJECTAnother important aspect of the question concerns how successfully the hybrids themselves are reproducing. Mules, for example, are hybrid offspring of a donkey and a horse, but are sterile and therefore not considered a standalone species. While the hybrid guenons are successfully mating with other hybrids, it’s still unclear how well this lineage is doing from an evolutionary perspective.

“At this point we do not know much about the fitness or fertility of ‘hybrids’ in the Gombe hybrid zone,” writes Cortes-Ortiz. Detwiler’s study “gets us closer to finding an answer,” she writes, “but it requires further investigation on the overall genomic composition and fitness of individuals in the hybrid zone to accurately understand the extent of isolation between these species.”

Detwiler says her next move will be to study the fitness of hybrid guenons compared to the blues and red-tails. She also intends to look in the nuclear DNA of her samples for evidence of nuclear gene flow—the transfer of functional alleles—from one species to the other and to the hybrid offspring.

Correction (July 5): The third paragraph mistakenly referred to Detwiler as Gray. The Scientist regrets the error.