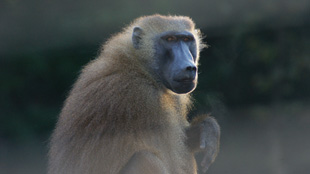 Although they have no known language, baboons can accurately discriminate four-letter English words from non-words, according to a study published today (April 12) in Science.

Scientists have typically considered this—the visual analysis of letters and their positions in a word—the first step in the reading process and fundamentally dependent on language. For example, little children learn to read by sounding out words they already know. But the new finding suggests that ability to recognize words is not based on language skills but on an ancient ability, shared with other primates, to process visual objects.

“Ultimately, reading depends on language," wrote Michael Platt, director of the Duke Institute for Brain Sciences at Duke University in Durham, North Carolina, in an accompanying essay in Science. "But at what stage in the process of translating written symbols into meaning is language necessary?”...

A 2011 study concluded that the visual analysis of letters, called orthographic processing, happens in a region of the brain associated with object recognition, suggesting that when we read, we are adapting brain pathways which evolved to recognize everyday objects, like rocks and trees, to identify printed words. A baboon taking part in the study
J. FAGOT

Based on this idea, Jonathan Grainger and colleagues at the National Center for Scientific Research and Université d'Aix-Marseille in France hypothesized that orthographic processing therefore may not depend on a preexisting language. “It seems one could use letters and letter combinations as clues to the identity of a word, as kind of a visual object,” said Grainger. So his team set out to find out if primates without a language had the same ability.

Over a six-week period, the researchers trained six baboons (Papio papio) to discriminate randomly selected four-letter English words, like “wasp” and “kite,” from artificially generated four-letter non-words, like “stod.” Words and non-words were presented in 100-word trials on a computer screen, and baboons received a treat for identifying a word (pressing an oval) or a non-word (pressing a cross).

Initially, the screen repeated words more frequently than non-words to teach the baboons the words. Once the baboons had learned a word, they were able to recognize it with 80 percent accuracy. Each new word was added into the ever-increasing pool of already learned words and non-words. One baboon was able to discriminate 308 words from 7,832 non-words with about 75 percent accuracy.But the baboons weren’t simply memorizing which four letter sequences were words and which were not. After the initial learning phase, when the baboons were presented with a new word for the first time, they labeled it a word far more often than they labeled a non-word a word. “This is evidence that the baboons have implicitly extracted information about what distinguishes the real words from the non-words,” said Grainger. That information probably includes which letter combinations appear more frequently in words versus non-words, such as a K before an I in “kite” and “kill,” instead of an I before a K. In addition, the more similar a non-word was to a word, the more likely the baboons were to respond that it was a word. The same trend was found in a recent analysis of human responses to non-words, suggesting baboons and humans share similar orthographic processing abilities.

A prior language, therefore, is not necessary in order to perform orthographic processing, the authors conclude. The finding implies that this first step to reading is an ancient, conserved ability among primates rather than a recent, human-specific phenomenon. “It suggests that when we learn to read, even though words are these spatially arranged combinations of symbols that look a little weird, we are in fact using very basic elementary processes associated with everyday object identification,” said Grainger.

The finding has implications for studies of dyslexia, said Platt. It suggests that visual areas of the brain did not develop specifically to support reading, which was invented at most 5,400 years ago. “The observation that neural circuits involved in reading and writing are not hard-wired may explain why most people with dyslexia can learn to read, albeit sometimes more slowly and with less fluidity than people without dyslexia,” he wrote in Science. “The very plasticity that enabled humans to invent reading and writing can be harnessed to overcome dysfunctions in the underlying neural circuitry.”