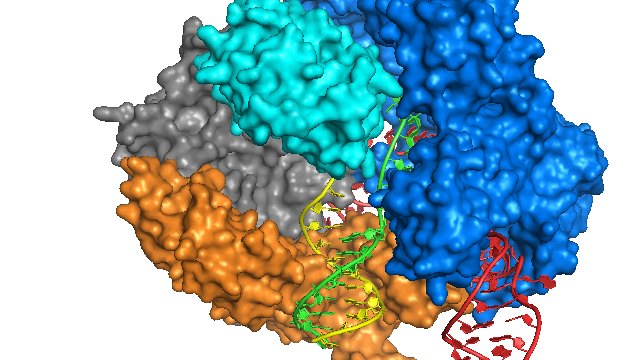 WIKIMEDIA, CAS9 WIKI PROJECTFollowing closely on the heels of the discovery of several proteins that can block CRISPR-Cas9 activity in human cells, researchers from the University of California, San Francisco, report yet more anti-CRISPRs, in a study published in Cell today (December 29). Joseph Bondy-Denomy of UCSF and colleagues demonstrate how two such inhibitors can stop CRISPR gene editing activity in both bacterial and human cells, by impeding the Cas9 enzyme from Streptococcus pyogenes.

“The next step is to show in human cells that using these inhibitors can actually improve the precision of gene editing by reducing off-target effects,” said coauthor Benjamin Rauch, a post-doc in Bondy-Denomy’s lab, in a press release. “We also want to understand exactly how the inhibitor proteins block Cas9’s gene targeting abilities, and continue the search for more and better CRISPR inhibitors in other bacteria.”

The researchers found these Cas9 blockers by searching...

Two of the inhibitors blocked Cas9 from Streptococcus pyogenes, the form of the DNA-cutting enzyme frequently used in genome editing. In a study published earlier this month in Cell, a different team of researchers reported the discovery of several anti-CRISPRs that block Cas9, but none of them acted against the activity of the Cas9 from S. pyogenes.

“The expression of these inhibiting proteins could be triggered in response to a given condition, or at a particular time point in the development of an organism, which would put a stop to the activity of Cas9,” Philippe Horvath, a senior scientist at DuPont in France, told The Scientist in reference to the earlier study. “A clever way to store the molecular scalpel into its safety case.”