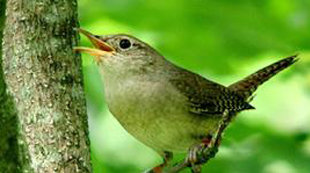 Animals faced with an infection may choose to focus on producing higher quality current offspring instead of trying for more broods later, according to a new study on house wrens. Published Wednesday (March 28) in the Proceedings of the Royal Society B, the study also suggests that, depending on their gender, fledglings may respond differently to the increased resources their parents allocate them. Male hatchlings of mothers with a simulated bacterial infection grew larger while female offspring showed stronger immune responses.

"It's an interesting paper," said Gabriele Sorci of the Université de Bourgogne in France, who studies the evolution of immune regulation in animals, but was not involved in the study. Animals faced with stressful conditions, like an infection, must choose between breeding anyway, which can sap their strength further, and trying to reproduce later when they've recovered. The study on house wrens...

In order to examine how birds would respond to a putative immune response, first author E. Keith Bowers, a graduate student at Illinois State University, and his colleagues injected one set of brooding mother wrens with lipopolysaccharide (LPS), which mimics a bacterial infection by stimulating immune cells. Control birds were injected with saline, and all birds had their eggs removed, to force them to try breeding again in the midst of their heightened immune response. If an immune response forced birds to choose their own health over reproduction, LPS-injected birds would produce fewer sets of replacement eggs.

Both sets of birds reproduced again at the same rate, and produced similar clutch sizes, suggesting that they were concentrating on immediate reproductive success. How exactly to measure this effort can be tricky, and Bowers chose to look at the "quality" of the offspring by measuring their size and the health of their immune systems.

Bowers suggested that these data showed that the LPS-challenged mothers were allocating more resources to their offspring and producing higher-quality broods. House wrens don't build their own nests, instead nesting in ready-made hollows, which are rare resources. Males, who will compete strenuously for both female attention and a nesting site, benefit from larger size, explained Bowers. Females don't compete, so it's better for them to build a stronger immune system with any extra resources, he said.

Although the findings are intriguing, it may be easy to over-interpret them, noted Thierry Boulinier of Centre d'Ecologie Fonctionnelle et Evolutive in France. Boulinier, who did not participate in the study, would like to see the data replicated over more than one breeding season. It may make sense to argue that males benefit from size and females from stronger immune systems, but the mechanism remains unclear, Boulinier said. A study demonstrating, for example, that males are less susceptible to parasites and therefore don't need to devote resources to building up their immune systems, would help support Bowers' interpretation, Boulinier explained.

It would also help support the findings if future studies showed that sons and daughters of LPS-challenged mothers produced more offspring, said Sorci. This would demonstrate that the increases in size and immune function really do measure reproductive quality. Also, Sorci explained, the argument that the mothers are investing more energy into their current brood could be measured over later seasons. Sorci predicts that LPS-challenged mothers who tax themselves in the current season might produce fewer offspring next year.

Bowers pointed out that the birds' choice to invest more now is context dependent. House wrens often produce two to three clutches a season, and Bowers performed his experiment later in the season, when waiting to try again might interrupt or delay a hard winter migration. He theorized that if the experiment had been performed early, when birds had more time to produce a later clutch, they might have chosen to recuperate instead of reproducing again immediately.

The choice between breeding now or later is also influenced by how strong the infection is, said Sorci. The LPS injection didn't seriously threaten the birds' lives, but they might have abandoned attempts to produce more eggs if "their only choice for survival is to deal with the infection."