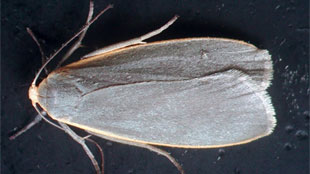 Japanese lichen mothCREDIT: RYO NAKANOThe ultrasonic courtship displays of many moth species are believed to have evolved in response to bat echolocation—a capability the flying mammals evolved around 60 million years ago. Moths had evolved ears that could detect the ultrasonic pulses of a hunting bat. But this expanded range of hearing opened a new line of communication between males and receptive mates.

According to a new hypothesis by Ryo Nakano from the University of Tokyo, not only did bats influence the origin of the moths’ songs, but they also shaped how honest or deceptive they are.

This idea, published today (June 20) in Scientific Reports, is based on experiments of two moths species. In an earlier study, Nakano showed that the female Asian corn borer moth (Ostrinia furnacalis) stops moving when she hears the courtship song of a male, allowing him to easily mate...

Now, his team confirmed why: the female cannot distinguish between a male’s song and a bat’s call. When either sound was played from a speaker, the females behaved as if they heard a bat—they stayed still to avoid detection or, if they were flying, performed evasive maneuvers. And if his team muted the males—by removing the wing scales that they rub to make songs—the females resisted their mating attempts and flew away.

By producing songs that sound like bat calls, the males exploit the females’ anti-bat freeze response. “We were really surprised that female corn borers copulated . . . when simulated bat calls were broadcast,” said Nakano.

In contrast to this deception, the team found that males of the Japanese lichen moth (Eilema japonica) produce a courtship song that females can distinguish from a bat’s call. This species reacts to bat calls by emitting defensive ultrasonic clicks, which may warn bats about distasteful chemicals or jam their sonar. Females did this in response to bat calls played through speakers, but not to male songs. Likewise, females would accept muted males if they were accompanied by the playback of a courtship song, but not a bat call.

Nakano hypothesizes that the initial structure of the moths’ sounds determined their evolutionary trajectory. If the initial sounds were similar to bat calls, they developed into a deceptive courtship song like the call of the corn borer. If those early sounds were distinguishable from bat calls, they developed into an honest song as is the case with the lichen moth.

Bill Conner at Wake Forest University, who studies moth communication, called the study a “tour de force,” but he is not yet sold on Nakano’s hypothesis. “The proof of their hypothesis awaits a fine-grained phylogenetic analysis of the evolution of moth courtship signals within any moth group,” he said. “We don't have that yet.”

Michael Greenfield from the University of Tours, France agrees. “We have no way of knowing whether [lichen moth] females originally had the capacity to discriminate male songs from bat echolocation signals or whether they evolved this ability over time,” he said. “A comparison of Ostrinia and Eilema basically tells us nothing that we did not already know, and leaves the evolutionary trajectory of male courtship song unresolved.”

But Nakano said that his team have already started to study other moths, and are preparing a paper about a species whose males use both deceptive and honest calls during mating.