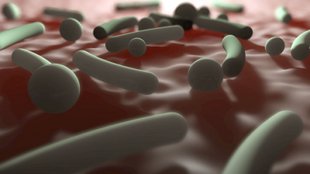 V. ALTOUNIAN/SCIENCE TRANSLATIONAL MEDICINEThe brain—the most exalted and enigmatic of organs, which is closed off from the rest of the body by a largely impermeable barrier—could not seem more disconnected from the intestine. Yet, according to a paper published today (November 19) in Science Translational Medicine, it’s thanks to the contents of the gut—specifically, the resident bacteria—that the mouse brain’s impermeable barrier develops properly, both before and after birth.

“It’s absolutely fascinating to think that gut bacteria can control permeability of the blood-brain barrier,” said Caltech microbiologist Sarkis Mazmanian who was not involved in the study. “Many neuroscientists staunchly believe that the blood-brain barrier is an incredibly impermeable membrane to many molecules and . . . would hardly believe that gut bacteria would control such an integral part of our neurobiology.”

The blood-brain barrier (BBB), which shields the organ from blood-borne infections, toxins, and more, is created...

A similar barrier—made up of epithelial cells and tight junctions—lines the intestine and stops the trillions of microbes present in the gut from escaping into the body. It’s known that the gut bacteria themselves control integrity of this intestinal barrier, said Sven Pettersson of the Karolinska Institute in Sweden who led the new study.

It’s also known, he said, “that [gut] microbes could modulate brain function and development.” Pettersson and his colleagues therefore wondered whether the effect of gut microbes on the brain might be manifested in part by control of the BBB.

The team compared development of the BBB between germ-free fetal mice and those with normal microbiomes. As expected, the mice with normal microbiomes exhibited normal closure of the BBB toward the late stages of fetal development—a traceable antibody that could be detected readily entering the brain in the early fetus became restricted to blood vessels later on. In the fetuses whose mothers were germ-free, however, the antibody continued to enter brain tissue even late in pregnancy.

This increased barrier permeability was associated with low expression and disorganization of tight junction proteins and was shown by additional methods to persist into adult life. That is, pups that were born to germ-free mothers and that remained germ-free throughout life had leakier BBBs as adults.

“The interesting thing here is that it is [controlled by] the mother’s microbiome,” said John Cryan, chair of anatomy and neuroscience at University College Cork in Ireland. “We largely think of the influence of the microbiome as having a postnatal effect, but here they show clearly that even before the animals get exposed to microbes, the fact that their mothers are germ-free is already impacting on their development,” he said.

In the adult mice, transplantation of fecal matter from animals with normal microbiomes into the germ-free animals, not only corrected the expression of BBB tight junction proteins but reduced barrier permeability, the team showed. A similar effect was obtained by giving the germ-free mice bacteria-derived short chain fatty acids, suggesting that the production of metabolites may be part of the mechanism by which the bacteria control barrier integrity.

Although the precise mechanisms remain to be determined, said Cryan, “we know that the microbiota is critical for the developing brain and now we know it is also critical for the blood-brain barrier.”

“Therefore,” he added, “anything that threatens the microbiota homeostasis could potentially threaten the integrity of the blood-brain barrier.”

Indeed, “anything that happens to the mother during pregnancy that can have a negative effect on her intestinal bacteria could adversely affect the development of the fetal brain,” speculated Stephen Collins, director of the Farncombe Family Digestive Health Research Institute at McMaster University in Ontario. “For example, antibiotic usage during pregnancy theoretically—if these results can be extrapolated to humans—could actually have some impact on brain development.”

And that’s not all. “The development and final closure of the blood-brain barrier isn’t quite finished at birth,” added Collins, explaining that the process continues during the early days of postnatal life. “So, again, anything that interferes with intestinal bacteria . . . after the child has been born”—such as antibiotic use or delivery by cesarean section, which is thought to prevent the offspring receiving a dose of microbes from the mother’s birth canal—“could also prevent the proper closure of that barrier and therefore the proper development of the brain,” he said.

Collins pointed out, however, that “so far, this remains an important observation that has been made in a mouse system and hasn’t yet been proven to be the case in man.” Moreover, “there are situations in pregnancy and around birth where antibiotics are required to save the life of the mother or the fetus,” he added.