ABOVE: A wild mouse
© ISTOCK.COM, CREATIVENATURE_NL

A mouse’s gut microbiome is, largely speaking, inherited and alters very little throughout multiple generations, according to a long-term study of caged wild mice published in Science today (October 25). While this vertical transmission predominates in the given experimental setup, the study also reveals that certain genera of bacteria could spread horizontally from cage to cage—via the air or animal handlers—and that such taxa are related to disease-causing species in humans.

“I was very excited to read this, because this paper confirms that different wild mice . . . can be brought into standard laboratory environments and [after generations of inbreeding] their distinct microbiota are very faithful to the original mice,” says immunologist Barbara Rehermann of the National Institute of Diabetes and Digestive and Kidney Diseases who was not involved in the study. “This indicates that anything that is vertically transmitted has probably been selected over eons of years because it’s very well accommodated to the host and confers host benefits.”

Mammals have trillions of bacteria in and on their bodies representing thousands of species, says evolutionary biologist Andrew Moeller of Cornell University who led the study. These bacteria perform various important roles in health including metabolic functions, the development of the immune system, and more. The question was, says Moeller, “Where do individuals get their microbes from?”

Both vertical (from mother to offspring) and horizontal (from non-kin individuals) transmission of gut bacteria occur, “but we didn’t know which microbes tended to favor which transmission routes” or whether it was largely random, Moeller explains. Because it is practically impossible to observe transmission events in action, scientists can only make inferences from observations. “And a great way to make sure your inferences are correct is to control everything as best you can,” he says.

To do this, his team tracked natural microbiomes under laboratory conditions. They collected house mice (Mus musculus domesticus) from the wild in Tucson, Arizona, and Edmonton, Canada, set up mating pairs, and produced 17 inbred lines—via sibling matings—for up to 11 generations.

Each of the 17 lines was housed in a separate set of cages within the same room as the other lines. Individuals therefore came into direct contact only with their mothers and siblings and “the only way for bacteria to jump between mouse lines would be through the air, through the animal handlers, or through the indoor environment in some way,” explains Moeller.

The team collected samples of gut contents from each mouse’s cecum—a region of the large intestine—and, from this, amplified and sequenced microbial DNA to reveal the composition of the microbial communities. The researchers found that the majority of bacterial genera were transmitted vertically. Even by the final generation, an individual’s microbiome mostly resembled that of its wild ancestors rather than mice from other lines, though a small degree of convergence was observed. While vertical transmission was certainly favored by the housing conditions, says Moeller, the result indicates that diet and environment, which were the same for all lines, influenced the animals’ microbiomes to a lesser extent than their ancestry.

It also turned out that those genera that passed between mouse lines tended to be those with member species that cause severe infections and hospitalization in humans. This suggests that horizontal transmission may be required for a species to acquire pathogenicity.

“Many gut bacterial genera are shared across all mammals,” so the transmission findings from the paper are likely to be relevant to humans, albeit with some differences, says Moeller. For one thing, most humans, unlike mice, do not partake in coprophagia.

Erica Sonnenburg, a gut microbiome researcher at Stanford University who was not involved in the research, says the main finding of the paper—that the microbiomes of the mice show strong fidelity through the generations—reiterates the intrinsic importance of these organisms to health. “It is another piece of evidence . . . pointing to the likely possibility that humans and their associated gut microbes have coevolved and rely on each other,” she says, and therefore that any loss of microbial taxa, as appears to have happened in Westerners, “would be like losing a cell type.” 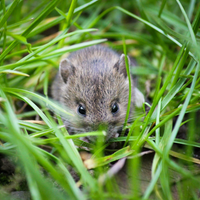