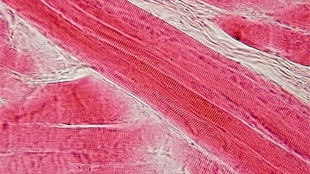 Skeletal muscleWIKIPEDIA, JAGIELLONIAN UNIVERSITY MEDICAL COLLEGEIf you prod a zebrafish embryo, it will normally twitch its tail and try to escape. By watching embryos that wouldn’t twitch properly, a team of scientists has discovered that a gene called STAC3 is the cause of a rare inherited muscle disorder called Native American myopathy (NAM). The team also showed that STAC3 plays an important and previously unrecognized role in muscle contractions.

“We studied this fish and, lo and behold, we found a gene that causes a really nasty human disease. I find it really gratifying,” said John Kuwada from the University of Michigan, who led the study. “It shows that this kind of research with model systems can be quite beneficial.”

“It’s a creative approach,” said Filippo Santorelli, a myopathy researcher at Stella Maris Foundation Research Hospital in Pisa, Italy, who was not involved in the study. Disease genes are...

Kuwada’s team bred a diverse range of mutant zebrafish, then checked for embryos with obvious motor problems—an intensive process involving eight scientists and a year of work. But in the end, the researchers identified a group of embryos whose tails never twitched when prodded and that never coiled and uncoiled their bodies as normal embryos do. These fish typically died as larvae.

By sequencing the embryos’ DNA and comparing it to the known zebrafish genome, the team traced these motor problems to mutations in a single gene called Stac3.

Normally, Stac3 produces the Stac3 protein, which is found on muscle cells. Specifically, they sit at junctions called triads, where the cell’s membrane folds inwards and meets an internal calcium-storing structure called the sarcoplasmic reticulum. When the fish want their muscles to fire, electrical impulses from incoming neurons create a voltage in the muscle cell’s membrane. Two triad proteins—DHPR and RyR—detect this voltage change and release calcium ions from the sarcoplasmic reticulum, resulting in a massive flood of calcium that makes the muscle contract.

But Kuwada’s mutant fish did not express the Stac3 protein and could not muster the calcium flood that coordinates muscle contraction. When the team added Stac3 to the muscles of these embryos, their movements returned to normal.

The team, including Eric Horstick, Jeremy Linsley, and James Dowling, then noticed that the gene’s human version—STAC3—is found in a region of the 12th chromosome that has also been linked to Native American myopathy (NAM). This mysterious genetic disease was originally identified in the Lumbee people of North Carolina. It is characterized by weak muscles and shortened joints, and around a third of affected individuals die before the age of 18.

Other scientists had suspected that triad proteins like DHPR and RyR might be involved in NAM, but couldn’t find any mutations that were linked to the disease. But when Kuwada’s team sequenced STAC3 in five people with NAM and 13 healthy relatives, they showed that everyone with the disorder carries the same single mutation in both copies of the gene—a mutation that resulted in a serine instead of a tryptophan as the 284th amino acid of the protein. When the team introduced this genetic change into their zebrafish, they once again produced defective swimmers.

“The idea that the human counterpart may be an important disease gene was always at the back of our minds, especially since there are many muscle diseases with unknown [causes],” said Kuwada.

His team is now trying to use zebrafish carrying the mutated version of the human gene to screen for chemicals that might alleviate their muscle problems—an approach that the researchers hope will lead to treatments for NAM.

They are also trying to work out how the Stac3 protein influences muscle contractions. Based on unpublished results, Kuwada suspects that Stac3 ensures that other relevant proteins like DHPR and RyR congregate at the triads. “There are dozens of proteins that are localized at the triads and only a handful are actually known,” said Kuwada. “Studies of [muscle diseases] are mainly centered around the machinery at the triads, rather than [what] gets those components to the right location. This is a whole new class of genes that could eventually give rise to myopathies.”