ABOVE: A patient cell infected with SARS-CoV-2
FLICKR, NIAID

Serum samples from 20 individuals who received the Pfizer-BioNTech vaccine against SARS-CoV-2 thwarted a version of the coronavirus with the so-called N501Y mutation, according to a preprint posted to bioRxiv yesterday (January 7). This mutation is one of many sequence changes present in the B.1.1.7 and 501.V2 variants of SARS-CoV-2 that were first detected in the UK and South Africa, respectively, and are now rapidly spreading around the world.

“There’s no reason to think the vaccines won’t work just as well on these strains,” Frederic Bushman of the University of Pennsylvania who tracks how the virus mutates and was not involved in the work, tells the Associated Press. But he adds that the study only examined one mutation and the B.1.1.7 and 501.V2 variants have many more mutations that were not tested.

N501Y resides within the coronavirus’s spike protein that enables entry into host cells. Scientists at the University of Texas Medical Branch at Galveston had already engineered a version of SARS-CoV-2 with the N501Y mutation to study in mice when the new variants emerged, The Washington Post reports. The researchers collaborated with scientists at Pfizer to expose serum—an antibody-containing component of blood—from vaccine recipients to the engineered virus, and found no differences in neutralization between the N501Y virus and virus with the original Y501 sequence.

According to Reuters, Pfizer had challenged its vaccine against 15 other mutations previously, finding them all to be inconsequential. “So we’ve now tested 16 different mutations, and none of them have really had any significant impact. That’s the good news,” Philip Dormitzer, Pfizer’s vice president and chief scientific officer of viral vaccines, tells Reuters. “That doesn’t mean that the 17th won’t.”

In particular, scientists have expressed concern about a mutation in 501.V2 called E484K, which is next to be tested, Dormitzer tells the AP.

Coauthor Pei-Yong Shi of UTMB tells the Post he expects to receive a viral variant next week to study in the lab. Moderna, AstraZeneca, and other vaccine makers are also in the process of challenging their vaccines with the B.1.1.7 and 501.V2 variants. Bushman tells the AP he expects similarly positive results. “A mutation will change one little place, but it’s not going to disrupt binding to all of them.”

Nevertheless, vaccine developers have not ruled out the possibility that a variant could evolve that would require reformulating vaccines. “These data don’t suggest a need for a change, but the mutations are hitting close enough to home that we need to be prepared,” Dormitzer tells STAT. 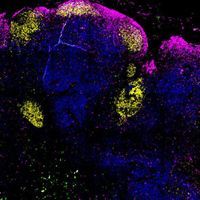