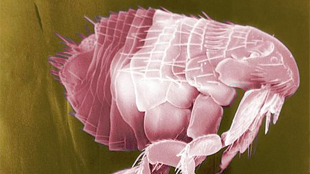 A flea photographed under a scanning electron microscopeWIKIPEDIA, CDC/JANICE HANEY CARRA team of Japanese scientists have found a way of endowing insects and other small animals with a suit of armor that lets them withstand an air-free environment. This “nano-suit,” created from detergent and plasma, allows living creatures to be photographed under a scanning electron microscope (SEM)—a treatment that would normally kill them.

SEMs have captured breathtakingly detailed images of small animals by placing them in a vacuum chamber and bombarding them with beams of electrons. The vacuum is necessary because gas molecules would scatter the electrons and lower the resolution of the images. But it also kills and deforms living animals by rapidly dehydrating them—water quickly evaporates across their surface and their bodies collapse. This is why SEM only works on dead specimens that have been preserved.

“Observation of living specimens with a high-resolution SEM would be...

Lead author Takahiko Hariyama from Hamamatsu University School of Medicine initially placed a variety of live animals in an SEM to see how long they could live, when he noticed that Drosophila larvae survived the high vacuum. The microscope’s electron beam was conferring some sort of protection upon the insect. Without it, the high vacuum crumpled their bodies and killed them.

Hariyama suspected that the energetic electrons immediately fuse molecules in the larvae’s cuticle together, creating a hard network all over the flies’ bodies. This nano-suit layer is just 50- to 100-nanometers thick, but it protects the larvae from the vacuum by preventing gases and liquids from exiting the body.

The team duplicated the effect by exposing larvae to plasma—ionized gas—which also provides enough energy to forge a nano-suit. This approach tended to work best on insects that have cuticles rich in amphiphilic molecules—those that are attracted to both water and fats, such as detergents.

To recreate this effect in animals lacking such molecules, the researchers first coated them in a non-toxic detergent called Tween 20. Exposing the detergent-soaked organisms to plasma or electrons, the team managed to create a nano-suit even on species that naturally lacked the right ingredients for one, including mosquito larvae, ants, amphipods, and even a soft-bodied flatworm. The animals all survived, and most of the mosquito larvae successfully transformed into adults after their SEM experience.

Although other teams have taken photos of live animals under SEM, these have always involved low vacuum conditions. At least one group of animals—the tardigrades—have survived in the high vacuum of space, but only after first completely dehydrating and entering a dormant state.  Even a tardigrade would collapse and die if suddenly exposed to an SEM vacuum.

“This is an interesting new technique but I'm not sure of the value it holds for microscopy,” said Gregory Paulson, an entomologist from Shippensburg University who was not involved in the research. When studying creatures with an SEM, there is always a concern that the structures you see might be an artifact of the way the specimens were processed, rather than actual body parts. “The technique described in this paper does solve that problem to some extent, but the presence of the nano-suit can also bring up the same criticism,” Paulson said.

The authors wrote in the paper that the nano-suit can “preserve the ‘real-life appearance’ [of the animals] down to microscopic detail,” but Paulson thinks this may not be true for aquatic animals like mosquito larvae. These creatures have fine hairs, gills, and other structure that tend to stick together when they are removed from water. This is not a problem for normal SEM use, because specimens are usually dried. But, Paulson said, “I think a feathery gill will appear as a blob when fitted with a nano-suit.”