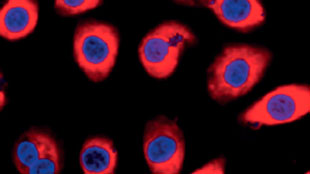 Nanoparticles (in red) taken up by skin cellsZHENG ET AL, 2012

Today’s moisturisers may make skin look and feel better, but tomorrow’s products may be able to switch off the genes that underlie many skin diseases. Researchers at Northwestern University have created small nanoparticles that can silence disease-related genes in skin cells after being applied via a cream or ointment.

Described today in the Proceedings of the National Academy of Sciences, the particles consist of small strands of RNA, densely packed around a gold core. They were 100 times more effective at shutting down a target gene than an alternative method using lipids to carry RNA into cells, and showed no harmful effects after weeks of use. With further testing and development, they could provide new ways of treating skin cancer, psoriasis, and other skin disorders caused by faulty or overactive genes.

“It is a major achievement and one...

Several existing drugs target the genes involved in skin diseases, but these are usually given as a pill or through an intravenous drip. This exposes internal organs to the drugs, which can lead to toxic side effects. Topical medications, which are directly applied to the skin, would be safer, but “the epidermis or outer layer of skin is a formidable barrier,” said Amy Paller, a Northwestern dermatologist who led the study with nanotechnologist Chad Mirkin, also at Northwestern.

Many groups have turned to small interfering RNA (siRNA) as a way of silencing specific genes in skin cells. There are many ways of smuggling RNA into the skin, including lasers, ultrasound, microscopic needles, and chemical chaperones, but these methods often rely on special equipment and can be painful. Furthermore, because much of the RNA will be lost in the process, they have to start off with extremely high levels of RNA to get enough inside the skin. And even if the RNA breaks through the epidermis, it is destroyed very quickly.

Mirkin has solved these problems by attaching siRNA using to gold nanoparticles, an approach that he has been developing for many years. The particles are safe, stable, and able to enter virtually any cell they come into contact with.

When combined with a commercial moisturiser, Mirkin and Paller found that the particles penetrated almost 100 percent of human skin cells in vitro—a better result than for any other cell type yet tested.

The researchers used nanoparticles carrying siRNAs that suppressed EGFR, a gene that controls the growth of skin cells, and is overly active in many cancers. Once inside the cells, the particles suppressed the expression of EGFR by around 90 percent, and did so with 100 times less RNA than the commercially available lipid-based method. The particles could also enter the skin of hairless mice and human skin samples, where they reduced the expression of EGFR activity by 65 percent and 52 percent, respectively.

Mirkin and Paller found that the nanoparticles did not cause any harmful effects, and they barely affected the expression of genes besides EGFR. They also did not attract the attention of the immune system, probably because immune cells can’t get at the individual RNA molecules, which are so tightly clustered around the gold cores.

The constructs were almost totally cleared from the skin within 10 days, and barely spread from the site of application. “We did not detect them in internal organs,” said Paller. “Even after 3 weeks of application, there was a trace amount in the liver [and spleen] and essentially nothing in other organs.”

“The studies performed so far are relatively short term, and so it will be important to determine if there are any long-range side effects inherent to this technology,” said Leachman. “At this point, the data is extremely promising and will hopefully be quickly reproduced by other groups and in other disorders.”

The technology is now being developed by AuraSense Therapeutics, a company that Mirkin has a financial interest in. The researchers are now “pursuing studies on skin cancer, psoriasis, diabetic skin ulcers, and genetic disorders due to dominant negative mutations, Paller said. “These could easily be extended to other common skin problems, such as eczema, baldness, or wrinkles.”