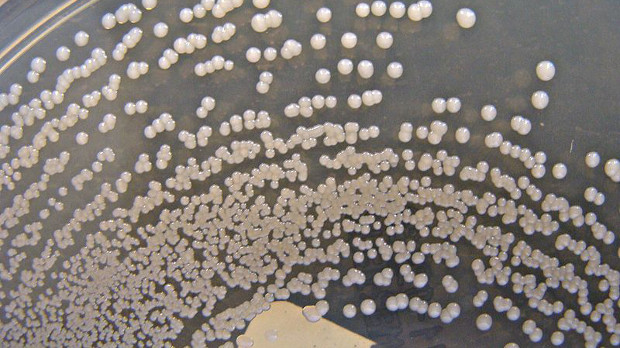 Staphylococcus aureus WIKIMEDIA, NATHAN READINGIt may be possible to treat a type of bacterial infection with an antibiotic without disturbing the normal microbiota, according to a study published today (May 9) in Antimicrobial Agents and Chemotherapy. Researchers at St. Jude Children’s Research Hospital in Memphis, Tennessee, have found that when administered orally at high does, a drug that targets Staphylococcus aureus called Debio1452 (formerly AFN-1252) has little impact on intestinal bacterial communities in mice.

“It’s a really exciting new way to target pathogens,” said Kristie Keeney, a microbiologist at the University of British Columbia, who was not involved in the work. Keeney said Debio1452 falls into a much-needed class of drugs that narrowly target gram-positive bacteria like multidrug-resistant S. aureus.

Historically, antibiotics have been designed to kill off many different species of bacteria, giving clinicians an efficient and inexpensive way to treat a range of infections....

Disrupting gut microbiota can lead to complications such as an overgrowth of resident species like Clostridium difficile, one major cause of healthcare-related infection. And scientists are only beginning to understand the long-term effects of microbiome alterations on metabolism and immune function, among other things. Narrow-spectrum antibiotics that target a pathogen selectively could help prevent such complications.

Debio1452, which is currently being developed by the Swiss pharmaceutical company Debiopharm, is designed to inhibit an enzyme called FabI in Staphylococcus species only. FabI controls the rate of fatty acid synthesis, a process required for bacterial cell membrane production and cell division. Although some other bacterial groups use FabI, Debio1452 targets an active site unique to the staphylococcal version of the enzyme. Rock, who studies bacterial fatty acid synthesis, wanted to test whether this specificity would allow Debio1452 to do its job while leaving the gut microbiome intact.

Rock and colleagues treated mice in groups of five with large doses of Debio1452 or one of four broad spectrum antibiotics every day for 10 days. They then performed 16S ribosomal DNA sequencing on stool samples taken throughout the experiment and for 27 days following the treatment. When they compared the phylogenetic compositions of the microbiomes of each group of mice, the researchers found that samples from the Debio1452-treated group more closely resembled samples from the untreated controls than any other treatment group.

At the taxa level, Debio1452 caused one bacterial family called S24-7 to drop from making up 30 percent to 50 percent of the bacteria to just 0.2 percent after 10 days of treatment. The S24-7 family fully recovered after two days off the drug. All of the other antibiotic-treated groups experienced substantial changes in major and minor taxa, which persisted anywhere from one to four weeks after the treatment ended.

David Relman, a Stanford University microbiologist who was not involved in the study, noted that even a very narrowly targeted drug will have some unanticipated effects on the complex ecosystem of the gut microbiome. “The story will always be more complicated than we’d like to think,” he told The Scientist.

The story may be further complicated when the drug is used during an ongoing infection, rather than in healthy mice, Keeney said.

Rock said that the presence of an infection shouldn’t affect the study’s results because his team used antibiotic doses beyond what would be needed to clear an infection (as previously determined).

Keeney noted that testing the drug’s effects on human microbiomes will be the only way to know whether the results hold up in the clinical setting.

Although Debio1452 is currently being tested in clinical trials, Rock said there are no plans to test its effects on human microbiomes, which differ from those of mice. Agencies like the US Food and Drug Administration currently don’t require drug companies to examine how new antibiotics affect gut microbiota.

Rock said that as the long-term effects of microbiome disruption become better understood, this may change and narrow-spectrum drugs may become more desirable. “Meanwhile,” he added, “we’ll go back to the bench and see if we can come up with something similar that we can use against gram-negative [bacteria].”