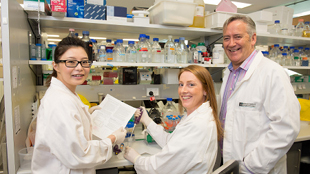 The cells lining the human female reproductive tract continually express an immune protein that may help protect against infection, according to a study published today (February 28) in Science. The protein, called interferon-ε, improved symptoms of genital herpes and chlamydia in mice.

Other type 1 interferons—cytokines that activate the immune system—are only expressed when a pathogen is present. But interferon-ε, which was first characterized in 2004, appears to be an exception. “We think it’s there all the time, priming the system so you always have some degree of protection,” said Paul Hertzog, an immunologist at the Monash Institute of Medical Research in Australia, one of the discoverers of interferon-ε, and an author of the new paper.

Hertzog and colleagues tested whether the pathways that typically activate...

The researchers also measured interferon-ε in women and found that, like in the mice, protein levels varied with the menstrual cycle. After menopause, the cytokine almost entirely disappeared. The patterns of its fluctuation indicated that estrogen was promoting its expression, while progesterone and progesterone derivatives were suppressing it, Hertzog said. Sure enough, giving estrogen to mice who’d had their ovaries removed induced interferon-ε expression, supporting this idea.

To explore the clinical implications of their finding, the team created mice lacking the gene for interferon-ε and exposed them to herpes virus and chlamydia. They found that signs of infection were more severe in the interferon-ε knock-out mice. Knock-out mice exposed to herpes had more genital sores than their wild-type counterparts and higher viral levels in the spinal cord, brainstem, and vagina. Knock-out mice exposed to chlamydia showed more visual signs of infection, and the researchers found more bacteria in their reproductive tracts.

“Their work is very interesting,” said Charani Ranasinghe, an immunologist at Australian National University, whose recent research suggested that interferon-ε could be fighting local infections in the gut, lungs, and reproductive tract.  “According to our work, [interferon]-ε is involved in mucosal immunity, and we too believe it could be used as a treatment against several mucosal infections,” said Ranasinghe, who responded to The Scientist by e-mail.

“The data [on herpes] looks pretty good to me, and of course the discovery of this new interferon-ε is very exciting,” said Uma Nagarajan, a professor of pediatrics not involved in the study who studies immune responses to chlamydia at the Children's Hospital of Pittsburgh.

But the data on chlamydia were incomplete, she said. She would have liked to see how the interferon-ε affected inflammation of the oviducts, an important chlamydia symptom that can cause infertility. Only a small percentage of women who contract a chlamydia infection develop the disease, she said, and so it would be important to further understand role of interferon-ε in the infection’s progression. “They have done very preliminary work on the infection model.”

Going forward, Hertzog wants to also look at interferon-ε’s influence on other sexually transmitted diseases, fungal infections, and even cancers. He added that it could potentially be used as a therapy to provide women with better protection against pathogens, and that understanding the vaginal immune system could lead to a better understanding of how to formulate vaccines for sexually transmitted diseases.