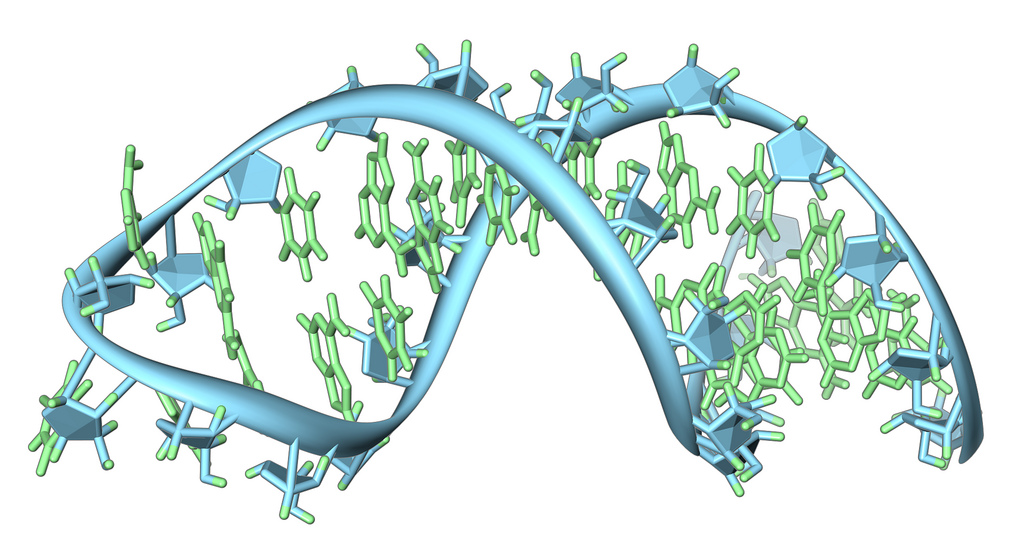 Artist's impression of an RNA strandFLICKR, VOSSMANLong noncoding RNAs (lncRNAs) comprise a mysterious class of molecules that are more than 200 nucleotides in length, but do not code for any proteins. Now, in a December 15 study published in Science, researchers identify 499 lncRNAs as functional and have made strides toward understanding how these molecules work. Unlike most coding genes, which tend to be essential across diverse cell lines, nearly 90 percent of the lncRNAs genes identified appear to affect robust cell growth in just one of the six cell lines tested, the team reported.

“Long noncoding RNAs are a pretty mysterious set of transcripts that are abundantly present in most cells,” said coauthor Daniel Lim, a neuroscientist and clinician at the University of California, San Francisco (UCSF). “What wasn’t known is how many there are, and which are important for basic biological functions. Our surprising...

Prior studies have demonstrated that certain lncRNAs play critical roles in cellular function, development, and disease. “We have known for over a decade that a large portion of the genome is transcribed into lncRNAs,” said John Rinn, an expert in lncRNAs at Harvard University who was not involved in the study. “Several groups have shown that indeed dozens of lncRNAs are critically required for cells and even viability of organisms.”

But beyond a handful of studies, precious little was known about how lncRNAs function. “What we didn’t know was how any of these function and what cell types they tend to function in,” said coauthor Jonathan Weissman, a professor cellular and molecular pharmacology at UCSF. “We didn’t have a good perspective on the biological important of lncRNAs, and we had limited tools for trying to address this.”

In an attempt to address that gap, Lim, Weissman, and colleagues developed a CRISPR interference (CRISPRi) platform that targeted 16,401 lncRNA loci in seven diverse cell lines, including six transformed cell lines and human induced pluripotent stem cells. After screening thousands of loci by inhibiting the expression of each candidate lncRNA with their modified CRISPR technique, the scientists identified 499 loci required for robust cell growth, 89 percent of which appeared to function exclusively in one cell type.

“The power of this technique was really provided by CRISPRi,” Lim said. “We were able to shut down the transcription of these non-coding transcripts.” In order for the CRISPRi screening to run smoothly, the team also built a library of 10 guide RNAs for each loci, which translates to approximately 170,000 guide RNAs. The library, which the team named “CRiNCL” (CRISPRi noncoding library) will be available through Addgene.

The most surprising finding, the authors wrote, was that the vast majority of lncRNA genes appear to modify cell growth in only one cell type. “Unlike protein-coding genes, which are often essential in many different types of cells, the lncRNAs that were essential in one cell rarely played an important role in the other cell types,” Weissman said. “That suggests lncRNAs play a role in giving each cell its own identity.”

Rinn praised the findings. “This heroic effort is the first genome-wide screen for lncRNA biology across specific cell types,” he said. “From this study we can now conclude that a majority of lncRNAs are important to cell viability, as had been suspected. But now the proof is in the pudding, so to speak.”

He cautioned, however, that it is still unclear how the 499 lncRNA loci identified might affect cell growth. “This study took great care to control for numerous shortcomings of genome-wide screens,” Rinn said. “However, this study can’t rule out if it is the act of transcription of these lncRNAs that is important or the final RNA product acting as a functional molecule.”

Rinn added that the findings could eventually have implications for targeted cancer therapies. “The authors demonstrated that many lncRNA loci are important in cell-proliferation,” he said. “Thus in diseases such as cancer where cell proliferation is required, the identified loci could represent a new avenue for RNA based therapeutics.”

Indeed, said Lim, future cancer treatments may benefit from targeting lncRNAs crucial to cancer cell function, while having little or no effect on nearby cells that do not require those same lncRNAs. “Current chemotherapy drugs are cytotoxic,” he said. “In order to cure complex diseases like cancer, I think studying what makes them special and different from normal tissues and cells might have therapeutic implications.”

Nearer term, Lim said he hopes that other researchers will be able to make use of the CRiNCL library. “One of our goals was to make it possible for other people to expand on these findings on their own,” he said. “It’s hard to guess or even predict lncRNA function, because we still know so little about the non-coding genome.”

Correction (December 16): A previous version of this article mistakenly identified the 499 lncRNA loci in this study as “new” and “previously unknown”. The study did not identify new lncRNAs—it demonstrated that 499 known lncRNAs are functional. The article has been updated throughout to clarify this point.