ABOVE: Study participant David Mzee, who is 28 years old and was paralyzed in a sports accident in 2010, takes steps assisted by patterned epidural electrical stimulation and a body weight harness.
JEAN-BAPTISTE MIGNARDOT

Electrically stimulating the neurons in the spinal cord in a pattern that recapitulates the brain’s control of walking has helped three men with spinal cord injuries take steps after years of being wheelchair-bound, according to a study published today (October 31) in Nature.

In September, two other research teams detailed their use of continuous epidural electrical stimulation and physical therapy to help three patients walk years after paralysis in the New England Journal of Medicine and Nature Medicine. Taken together, the three studies reveal the previously untested capacity of the human spinal cord to recover from trauma.

“One misunderstanding about spinal cord injury is that . . . the whole spinal cord...

Scientists have previously determined that animals such as rats and nonhuman primates respond to epidural electrical stimulation by making new connections with neurons below the site of spinal cord contusions and regain some motor function in the lower part of their bodies. Similar efforts in humans, such as those in the two studies published in September, take a long time to work and must be accompanied by rigorous physical training.

Grégoire Courtine of the Swiss Federal Institute of Technology Lausanne in Switzerland and colleagues showed in prior animal experiments that electrical pulses to the spinal cord target the posterior roots—nerves coming into the spinal cord from the periphery—to activate the motor neurons these roots control. The team also showed that, when timed to align with the desired movement, targeting specific sites with the electrodes helped paralyzed animals walk.

In the current study, Courtine’s team evaluated a similar type of precise spatiotemporal stimulation in three men who’d had paralyzing spinal cord injuries years earlier. Before the trial, one subject, 47-year-old Sebastian Tobler, was not able to move anything below his trunk; another volunteer, 35-year-old Gert-Jan Oskam, had a little bit of function in both legs; while the third participant, David Mzee, age 28, couldn’t move his left leg at all, but could make some movements on the right side. 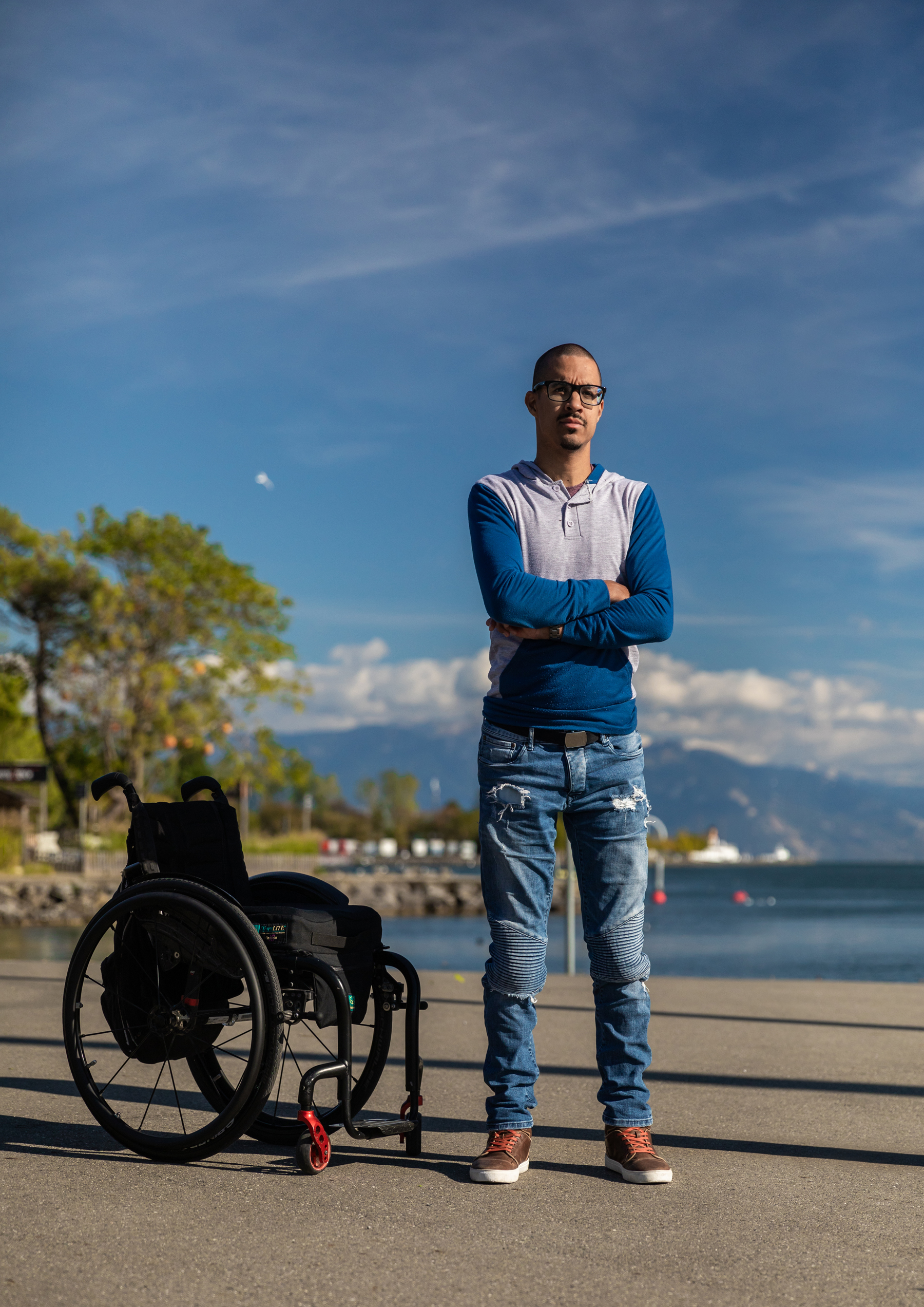 Study participant David Mzee stands next to his wheelchair.
©EPFL

Neurosurgeon and coauthor Jocelyne Bloch of Lausanne University Hospital placed an array of wirelessly controlled electrodes into the space around the spines of the three patients. Within a few days to a week of configuring the stimulators, all three individuals could make stepping movements while supported in a body weight harness as electrical stimulation was applied in a pattern designed to activate the appropriate posterior roots and motor neuron pools at the right time for walking. They could walk on a treadmill or take supported steps over open ground by timing their movements to coincide with the programmed stimulation patterns.

“The advantage of the approach that this group has used is that they are targeting specific levels of the spinal cord based on the area that the individual wants to activate to do a walking behavior,” says Edelle Field-Fote, a physical therapist and spinal cord researcher at the Shepherd Center in Atlanta, who was not involved in any of the studies. “If I wanted to cook a pot of beans, I don’t turn on the entire stovetop. It wastes much less energy if just turn on the burner that I want. That’s kind of what they’re doing here.”

Initially, if the researchers turned off the phasic stimulation or zapped the nerves continuously, the patients could no longer move.

In an accompanying study also published today in Nature Neuroscience, the same research team found that continuous stimulation likely works less effectively in people because it blocks proprioceptive sensing—that is, the body’s ability to perceive its own position and movement in space—which is necessary for locomotion.

Over five months of multiple physical training sessions per week with the patterned epidural electrical stimulation, the patients improved their ability to move their lower extremities, both in the presence and absence of the stimulation. Mzee, for instance, can take one or two steps without the electrodes turned on and without holding onto anything.

“Walking hands free really felt like more or less walking normally,” says Mzee. The trial has helped him be more comfortable in bed, as he has regained some ability to move his left leg voluntarily to adjust his position, and increased his cardiovascular fitness by allowing him to train both his arms and his legs. “It reminded me of the days when I was doing sports before the accident, and that was amazing,” he says.

Courtine cautions that it’s important to calibrate expectations. This strategy “shows potential, but it is not enough and we should not overstate what we have obtained because there’s still a lot of work to do to really change the lives of these people,” he says. While the participants will continue their rehab, each of them still relies on a wheelchair most of the time.

One way to improve this treatment, according to Vivian Mushahwar, an engineer at the University of Alberta in Canada who did not participate in the studies, would be to personalize the stimulation patterns so that they adapt to each individual’s style of walking, rather than having patients adjust their walking to fit the strategy.

Nonetheless, “it’s quite exciting to see this work,” she says. “To have people who were unable to walk in the past stand up and walk . . . emphasizes what the spinal cord can do.”