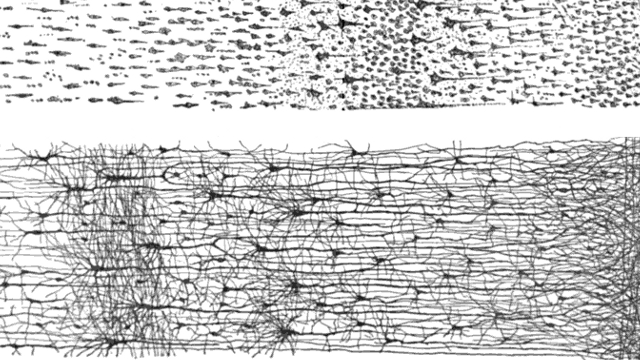 As both a scientist and an artist, Santiago Ramón y Cajal would surely have been blown away by the stunning "brainbow" images of neurons labeled in fluorescent technicolor that now grace the covers of many scientific publications. It’s even easier to imagine that this would be Cajal's reaction after you've watched Soldier of the Mind, a new drama by Australian barrister-turned-playwright Justin Fleming. The play was showcased as a staged reading last Friday (March 16) as part of the 14th Annual EST/Sloan First Light Festival at the Ensemble Studio Theatre in New York City.

Fleming first learned of Cajal in 2011 through a serendipitous meeting with Daniel S. Margulies, now...

The play begins in 1887 when Cajal is 35 years old and yet to be famous. It dramatizes the period when the Spanish neuroscientist performed the studies of brain anatomy that ultimately won him the 1906 Nobel Prize in Physiology or Medicine. (His cowinner was Camillo Golgi, developer of the "black reaction," a staining technique modified by Cajal, the scientist, to produce stunning images of the brain drawn by Cajal, the artist.) As a dramatic persona Cajal is a gold mine—he's a driven researcher in a country whose science is disdained in Germany and France, an artist, husband and father, conflicted son, and a writer. Just before Cajal conducted his studies of brain anatomy, he wrote a dozen science fiction stories, five of which were not published until 20 years later, after the author was famous. They can be read in Vacation Stories, a translation by Laura Otis, who also wrote an essay that paints an intriguing portrait of Cajal, the man. Fleming says these stories keyed him in to Cajal's droll and quirky sense of humor, "a vital ingredient of the play I wanted to write," which is peppered throughout with the scientist's wry comments. When his wife, Silveria, asks him, "What is an 'oxy-mor-on'?," Fleming has Cajal reply, "A Spanish scientist. There I was, foolishly imagining, on the basis of mere probability, that if I sent out enough copies [of his brain-anatomy findings], at least one prestigious personage might condescend to read it. But, no. Not one reply."

His domineering father, for whom the trait of honor was paramount, disdained Cajal's research. In his candid autobiography Cajal wrote: "My father . . . was almost completely lacking in artistic sense, and he repudiated or despised all culture of a literary or of a purely ornamental or recreative nature." Dripping with sarcasm, the patriarch says to Cajal in the play: "The scientific establishment in Paris and Berlin has confirmed that the nerve currents of the brain flow through a continuous network of connected cells. But Professor Cajal, in Barcelona, urges his pupils to enquire whether the brain cells might in fact turn out to be discontinuous and independent units."

When, brimming with excitement, Cajal describes his discovery to a friend able to grasp the significance of what he has found, Fleming has him say about the structure and function of nerve cells in the brain: "They blow a kiss across the gap. It’s logic, pure and simple. Since the axons terminate close to the dendrites, these parts of the nerve cell must have a function in the physico-chemical conduction of the nerve impulse. They are so close, they can pass the message."

In a profile ("Critical Connections," The Scientist, November/December 2011) of Harvard neuroscientist Josh Sanes, one of the developers of the labeling technique that resulted in mice with technicolor neurons, blows his own kiss to Cajal, saying that the 21st-century technique allows one “to distinguish individual neurons out of a morass. Just like what Cajal did with his Golgi stain. . . . Cajal was an incredible genius in that he could look at one neuron in each of 100 mice and then go home and draw a picture that synthesized all of that information. And almost always he got that right."

Soldier of the Mind is one of ten new plays being showcased for one staged reading at the 14th Annual First Light Festival, which runs from March 11?30. The Festival is an ongoing collaborative project between The Ensemble Studio Theatre and the Alfred P. Sloan Foundation dedicated to the development of "credible and compelling" stage works that "challenge the existing stereotypes of scientists and engineers."