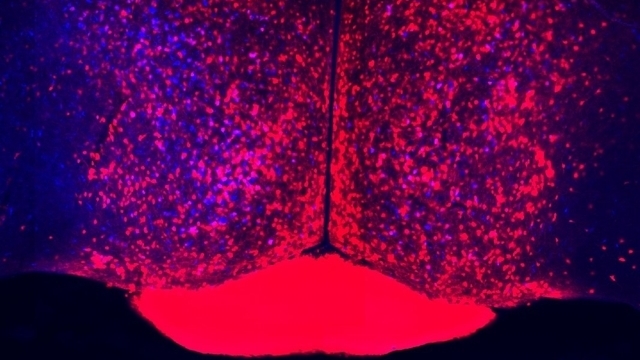 In the mouse brain, a cluster of neurons (red) within the medial preoptic area acts as a parenting control hub, orchestrating behaviors such as grooming and interacting with pups. DULAC LAB/HHMI/HARVARD

Whether in humans or in mice, parenting entails a suite of behaviors, including grooming, feeding, and protecting young, but the neural systems that guide these activities remain poorly understood. Researchers have now made some headway, having deconstructed some of the neural circuitry responsible for this complex behavior, which the authors say is the first such map of its kind. Yesterday (April 11) in Nature they report that the neurons that govern parenting in mice’s brains are organized into distinct pools originating in the hypothalamus, with each department communicating with any of 20 other regions in the brain and directing a specific parenting activity.

“This is a very ambitious study,” says Robert Bridges, a neuroscientist at Tufts University...

Back in 2014, Catherine Dulac, a molecular biologist at Harvard University and Howard Hughes Medical Institute, and her colleagues discovered that neurons that produce galanin, a neuropeptide, in the medial preoptic area (MPOA) of the hypothalamus, an area involved in thermoregulation and sexual behavior, are involved in parenting. In that study, they initially found that galanin was highly enriched in  MPOA cells in mice who were parents, but not in virgin mice. When they removed the gene that coded for these particular neurons in the mice’s brains, the mothers groomed their pups less often. Activating this same gene in virgin males—who are typically murderously hostile to pups—caused them to groom the pups.

In the latest study, Dulac set out to determine which brain regions these parenting neurons were communicating with, and the behavioral consequences of their chit-chat. She and her colleagues used viral neuronal tracing, in which viruses are deployed to infect brain cells and express fluorescent proteins in functionally connected neurons. Dulac and her team were able to identify more than 20 areas in the mice’s brains that send inputs to the galanin-producing neurons involved in parenting. “We got a bit overwhelmed by the number of brain areas involved,” says Dulac. “But the brain is complicated; it just illustrates that any type of behavior engages a lot of signals from across the brain.”

The researchers also infected galanin neurons with fluorescently labeled viruses to follow the neurons’ projections to synaptic targets throughout the brain. “Different galanin pools were sending inputs to different projection areas,” says Dulac. “That enabled us, in turn, to specifically modify them and identify their specific function.” By inhibiting different groups of neurons using optogenetics, Dulac’s team discovered that each cluster of neurons was involved in a different aspect of parental behavior.

Peggy Mason, a neurobiologist at the University of Chicago who was not part of the study, says the neural architecture Dulac’s study landed upon was already recognized, “but it’s never been elucidated in this kind of detail for parental behavior.”

Dulac and colleagues also investigated whether each functional clump of galanin neurons was receiving inputs from a specific area of the brain or integrating inputs from all over the brain. They used another virus that can only infect neurons that project to a particular area to track where they went. They found that a number of inputs from regions associated with reward and motivation were activated in the brains of parents, but not in non-parents.

“The evolutionary reward for parenting takes way too long for it to be useful for reinforcing the behavior,” says Mason, “so the reward is internal.”