After an accident as a teenager, he developed the disorder. He then studied the brain to better understand his own seizures, and now plans to sail around the world to show others with the condition how to push their limits.

On a sunny day in southern England in the 1970s, Phil Haydon and his friend were riding bikes home from school, excited to start their summer break. Suddenly, another classmate picked up half a brick and threw it. The projectile hit Haydon, then 15, in the forehead. Stunned, he tried to stand, but wavered. Blood covered his face and trickled down to stain the pavement, yet somehow he managed to get back on his bike and ride back to school, where someone called an ambulance that took him to the local hospital. Doctors there quickly transferred him to another hospital in Oxford, about 30 miles away.

Within an hour or two, Haydon started having seizures. He would lose consciousness, and his body would convulse. His doctors rushed him into surgery where they removed an inch-and-a-half-long shard of brick from his forehead. Afterward, they put him on sedatives to control the seizures, and gradually he recovered. He even returned to school a few weeks later when classes resumed. His memory was terrible, he recalls, but his father told the school not to give his son an inch—to push him to do all of his classwork. “It was the best advice he could have given them,” Haydon says.

Despite his hard work, Haydon still failed half of his classes. But he scored well enough on a particular set of tests to be accepted to an undergraduate program and headed off to the University of Leeds in 1976. There, he studied physiology and got his first experience running lab experiments, which taught him about the body and brain and offered insights into how his injury had affected him. Ultimately, he decided he would do a PhD in physiology.

When you are on a boat, you’re the skipper. You forget about everything you do at work, you forget anything that’s going on with your health, you just have to focus on sailing.

His professors at Leeds dissuaded him, saying his grades weren’t good enough. He argued with them, and then offered to pay his own way—using funds he’d gotten as compensation for his injury. He didn’t have the money for a full PhD, only enough for one semester, so he enrolled and did well enough to earn a scholarship that paid not only for two and a half more years, but for the semester he’d funded himself as well. “I’m really good at problem solving. I have a gut instinct when it comes to research questions, and that’s a lot of what’s important in life sciences,” Haydon says. He graduated in 1982, did a postdoc at the University of Iowa, and then worked at Iowa State University and University of Pennsylvania before accepting a faculty position at Tufts University in Boston, where he has been ever since.

Here, Haydon talks with The Scientist about how he became fascinated with studying the brain and why he’s chosen to sail around the world to raise awareness about epilepsy.

The Scientist: How did your accident lead you into a career in neuroscience?

Phil Haydon: When I had seizures, I would get what’s called an aura, which comes right before one. It’s almost like the beginning of a seizure, but you’re still conscious. In the aura, you’re in this sort of alien manner, your brain suddenly takes over control. I remember thinking, Oh my goodness, I think I have control, but I do not. The brain is just allowing me to think I have voluntary control. And I became fascinated, thinking about what’s going on in the brain. So I went into physiology because you couldn’t do a bachelor’s degree in neuroscience at the time, and then started studying the brain as a graduate student, which led to research on Alzheimer’s, depression, and other brain disorders.

TS: A lot of your work is focused on glia, the non-neuronal cells in the nervous system that provide much of its support structure, but don’t send electrical signals. How did you get interested in these cells?

Haydon: Anything in science I’ve done that’s been important has been total luck. And I actually think the best science is luck. To be lucky, you have to be prepared. And so we had this observation that you could not explain based on neurons. This was in the early 1990s. What we observed was that neurons appeared to be releasing the chemical transmitter glutamate. And I said to a colleague, well, let’s just kill the neurons and that will prove it. We killed neurons in a dish, and glutamate was still being released. . . . So we looked more closely, and we saw these other cells, and we thought, Oh my goodness, glia release chemicals.

And I remember we had a lab meeting, and I said, ‘Okay, we’ve got a decision to make: We may have just made the most important discoveries of our career, and we have to choose whether to just follow up on what we’re currently funded to do, or follow our nose and try and explore what glia do.’ We decided to change direction and look at glia. It took several years, because grants on glia just weren’t being funded then. But ultimately we looked at what do glia do in cell culture, then brain slices, then freely moving animals. A fun thing we found was that astrocytes—a type of glia—actually control sleep in a process called sleep homeostasis.

TS: How did that connect with your work on depression and Alzheimer’s?

Haydon: Sleep deprivation is an amazing antidepressant. Believe it or not. Clinically, a total night’s sleep deprivation can cause a major elevation of mood. Of course, you can’t permanently sleep deprive somebody—they’ll die. But there was a link between glia and sleep and depression, so we said let’s have a look and see whether or not glia mediate the anti-depressive effects of sleep deprivation, which we showed they did. For Alzheimer’s, glia were known to be reactive and inflammatory around amyloid, so we looked at glia and their role in the disease. We also looked at glia’s role in epilepsy and found a role for astrocytes in shuttling the precursors of the inhibitory neurotransmitter GABA to neurons. So [in the brains of people with epilepsy] you lose synaptic inhibition. And what happens? You have seizures.

TS: Do you ever think about glia and what’s going on in your brain when your sailing?

Haydon: Glia are fascinating. And I do think about them, say, when I’m sailing and I’m sleep deprived, I think . . . my cells, My astrocytes, are just oozing out adenosine, trying to make me go to sleep. 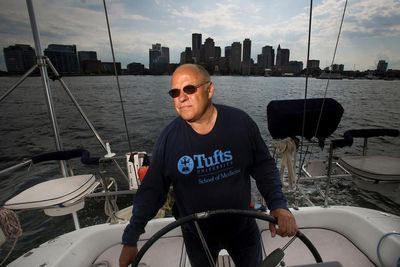 Haydon: When I was a kid, before the accident, I was a competitive whitewater kayaker. Then, I had this head injury that caused epilepsy, and I just thought it was probably best not to go back to it. Then I went to college, had a family, it got pushed aside. As my kids started to leave home for college, I decided, it’s time to do something I can be passionate about, and being on the water was really what I loved. Kayaking, I can’t do that yet. It’d be too dangerous. And so I decided to give sailing a shot. So in 2007, I took some sailing classes. And then I got hooked. I started with a cruise right up and down the coast [from Boston] into New York City. Then, in 2015, there was this New Year’s Day race in Boston Harbor. And I decided, I’ll do this race, what the heck. And I suddenly got the racing bug. So since then, I’ve been racing.

TS: You often sail alone. Do you have any fear or reservations about sailing solo with epilepsy?

Haydon: My seizures have been medically controlled for more than 40 years. But in terms of any medical condition, I think you have to put boundary conditions on what’s reasonable. So, for example, sleep deprivation can be a trigger for seizures in some people. Before I did a lot of offshore sailing, I actually practiced sleep deprivation at home. Take an hour nap at night, set an alarm clock, wake up an hour, go back to sleep for an hour, wake up for an hour. And I would just go through several days where I was doing that just to see within the constraints of being at home, whether or not I could manage sleep deprivation and not have any seizures. And I was ok, so I started doing longer trips and races and then thought about this trip around the world.

TS: You’ll sail into different ports around the world. Do you have plans to meet with epilepsy patients there?

Haydon: I do. I am coordinating with sponsors and the Epilepsy Foundation to reach out to local groups in the port cities and, more broadly, the countries [I’ll visit]. I hope to meet with people with epilepsy, and those interested to learn more, talk about my story and about my voyage, and just educate people in general about the brain disorder.

TS: Is there something specific that captivates you about being on the water, something that just keeps making you go back again and again?

Haydon: When you are on a boat, you’re the skipper. You forget about everything you do at work, you forget anything that’s going on with your health, you just have to focus on sailing, making sure you’re safe. Then, with time, I learned to love the sound of the water just rushing by the boat and trimming the sails just to get that extra little bit of speed.

And, there are the stars. There’s an incredibly starry night, and you’re just at one with the environment, your boat, and your mind. I can’t fully describe the sensation. It’s just amazing. And you have time. You know, you’re looking after the boat, you’re checking for issues. Then, you’re looking at the Milky Way stream across the sky like you’ve never seen before in your life. And you have time for your thoughts.

Editor’s note: This interview has been edited for brevity. Correction (February 20): Haydon's seizures have been controlled for more than 40 not 14 years, and he did not move to Tufts immediately after his postdoc. The Scientist regrets the errors.