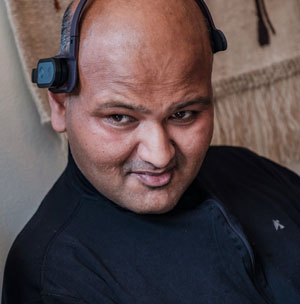 Rahul Desikan, a neuroscientist at the University of California, San Francisco, died July 14 at age 41 from amyotrophic lateral sclerosis.

He was known for developing a widely used method of automatically labeling regions of the human cortex based on MRI data, called the Desikan atlas, and for identifying genetic variants related to a number of neurodegenerative diseases. In recent years, he had written about living with ALS, a disease he also happened to study.

“I went into medicine to take care of patients with brain diseases. Now, I have one of the diseases that I study,” Desikan said in a press release earlier this year. “Even with this lethal disease, I continue to find neurology fascinating and beautiful.”

Desikan was born in India in 1978 and grew up in New York City. He studied neuroscience at Boston University for his undergraduate and PhD and attended medical...

“[It] quickly became one of the most widely-used tools in the neuroscience community, has been cited more than 4500 times,” Desikan’s UCSF colleague Christopher Hess writes in a memorial. “Color figures of the atlas in its various forms still fill the pages of our leading scientific journals.”

In 2015, he joined UCSF as a clinical fellow, two years later becoming a member of the faculty of Radiology & Biomedical Imaging, Neurology and Pediatrics, where he analyzed the genetics of neurodegenerative diseases.

According to a 2019 profile in Bostonia, it was in 2016, when Desikan’s team had just begun the largest study of ALS genetics to date, that he began to experience the symptoms of ALS. Several months later he was diagnosed with the fatal disease. “Even as Desikan is pouring his life into curing ALS, ALS is stealing the life he had,” the article states.

Desikan was nevertheless productive until the end of his life, publishing a number of papers on the genetic risk factors for ALS, Alzheimer’s, and other conditions. “People ask me, ‘What’s it like to work with him?’” postdoc Iris Broce told Bostonia. “I tell them, ‘He just texted me, I can’t keep up with him.’”

According to UCSF, Desikan leaves behind his wife, Maya Vijayaraghavan, who is a faculty member in the UCSF Department of Medicine, as well as two sons, his parents, and his sister.