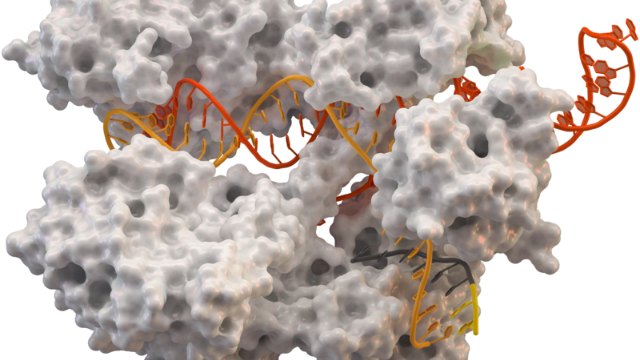 WIKIPEDIA, THOMAS SPLETTSSTOESSERMicrobes use a number of CRISPR-Cas systems for immunity, but it’s the class 2 system, typically utilizing the nuclease Cas9, that has been adapted for genome editing. A metagenomics search of microbes sampled from soil, groundwater, an acid mine drainage site in Colorado, and a Utah geyser has led to the discovery of additional class 2 CRISPR-Cas programs, including the first Cas9 identified in archaea and two small Cas enzymes in bacteria. Researchers published their findings in Nature today (December 22).

“It’s really cool to unearth gold out of the metagenomic dark matter,” said Rodolphe Barrangou, who studies CRISPR at North Carolina State University and was not involved in the study. “There’s so much more in nature than people appreciate.”

Although CRISPR is perhaps best known as a laboratory tool for tinkering with genetic sequences and functions, its origins lie in defending microbes from invaders. Scientists...

Over the past decade, Jillian Banfield of the University of California, Berkeley, and colleagues have been collecting microbes from various locations, extracting their DNA, and reconstructing their genomes. The result is a terabase-scale genomics collection of uncultivated bugs, which was mined for undiscovered CRISPR systems in the present study. “We hoped to find new [CRISPR] systems and we thought there was a reasonable chance given the size and diversity of the database,” Banfield told The Scientist.

Banfield’s team searched the genomes for sequences that were both near cas1, which encodes a conserved CRISPR protein, and close to characteristic sequence repeats. The researchers found sequences for Cas9 in two archaeal genomes extracted from the Richmond Mine in Iron Mountain, California. Previously, archaea were known to use class 1 CRISPR systems, but class 2 had only been identified in bacteria.

“We don’t really know how it performs, because that has not been achieved in the laboratory yet,” said Banfield. “Archaea have different biology. The fact that [my collaborators] haven’t yet managed to show its function probably means there are components of the system that we don’t yet know about.”

CasX is made up of only 980 amino acids, whereas other Cas enzymes are larger. For instance, the commonly used Cas9 from Staphylococcus pyogenes contains 1,368 amino acids, while a smaller one from S. aureus is made up of 1,053 amino acids (CasY is around 1,200 amino acids). “This is important biotechnologically, because if you look at if from the angle of genome editing, the delivery of small genes into cells is much easier than the delivery of large genes,” said Rotem Sorek of the Weizmann Institute of Science in Israel who was not involved in the work.

In partnership with UC Berkeley’s Jennifer Doudna, Banfield’s team demonstrated that CasX and CasY are functional. The researchers introduced CRISPR-CasX and CRISPR-CasY into E. coli, finding that they could block genetic material introduced into the cell.

“This warrants the investigation of whether this could do genome editing,” Barrangou said of CasX.

Banfield said Doudna’s group is continuing to characterize the function of these enzymes.

CasY came from bacteria within a large and only recently described group of microbes called the Candidate Phyla Radiation, which Banfield worked into an updated tree of life earlier this year. She added that this latest study is an example of the way metagenomics can tap the riches of a microbial universe that was once out of reach for scientists, but now at their disposal. “This is a case in point for what I think will be an avalanche of new proteins and pathways and systems that hold unimaginable biotechnology and medical value.”