In an analysis published earlier this month (February 4) in Current Biology, researchers identified 14 invasion hotspots along the proposed Belt and Road Initiative (BRI)—a network of overland corridors and maritime shipping lanes that will span half the planet. These areas have similar habitats, and are at a high risk of new species introductions based on the analysis of current movement of people and goods between these regions.

“The risk is that, as trade increase with the Belt and Road Initiative regions, that trade will bring greater numbers of accidental and intentional introductions,” Jeffrey Dukes, an ecologist at Purdue University in Indiana who also did not participate in the...

“There is no doubt that the BRI will massively increase risks for invasions of many kinds of vertebrate, insect, and pathogen species,” says Bill Laurance, an ecologist at James Cook University in Cairns, Australia, who was also not involved in the study, in an email. “Some of these invaders can have devastating economic and environmental impacts for host nations affected by the BRI.”

China launched the mega-infrastructure project in 2013 to revive and strengthen its global trade links. Considered the biggest development program ever to occur on Earth, the BRI cuts across Asia, Europe, Africa, Oceania, and America, covering 77 percent of global biodiversity hotspots. The undertaking, scheduled for completion in 2022, involves the development of ports, roads, railways, and airports, as well as powerplants and telecommunications networks.

In the new study, Yiming Li of the Institute of Zoology at the Chinese Academy of Sciences and colleagues evaluated the invasion risk of 816 vertebrates—including 98 amphibians, 177 reptiles, 391 birds, and 150 mammals—that are found across 123 BRI countries, from the Caribbean to northern Africa, Eastern Europe to Southeast Asia to New Zealand.

The researchers assessed the role of trade, air travel, and air and sea cargo volumes in the introduction risk of exotic terrestrial vertebrates and compared climates and habitats among BRI-connected locales. Their analyses of current risks, with BRI construction still underway, found that these areas face a high overall introduction risk.

Dukes says that introduced species are most likely to survive, reproduce, and become invasive where the climate is most suitable for them. “This typically means that they do well in regions with climates similar to the location in which they evolved,” he says. And once in new habitats, some of these alien species will thrive—often uncontrollably, he adds. “Some of these regions may not have sufficient mechanisms in place to regulate or protect against new species that are potentially problematic.”

The authors emphasize that it’s too soon to know how the BRI will affect these invasion risks, but say it’s something that should be monitored. “Of particular concern, we find that the majority of both introduction hotspots and areas with high habitat suitability fall along the six proposed economic corridors” that connect core cities and key ports, Li says in a statement. (See map below.) 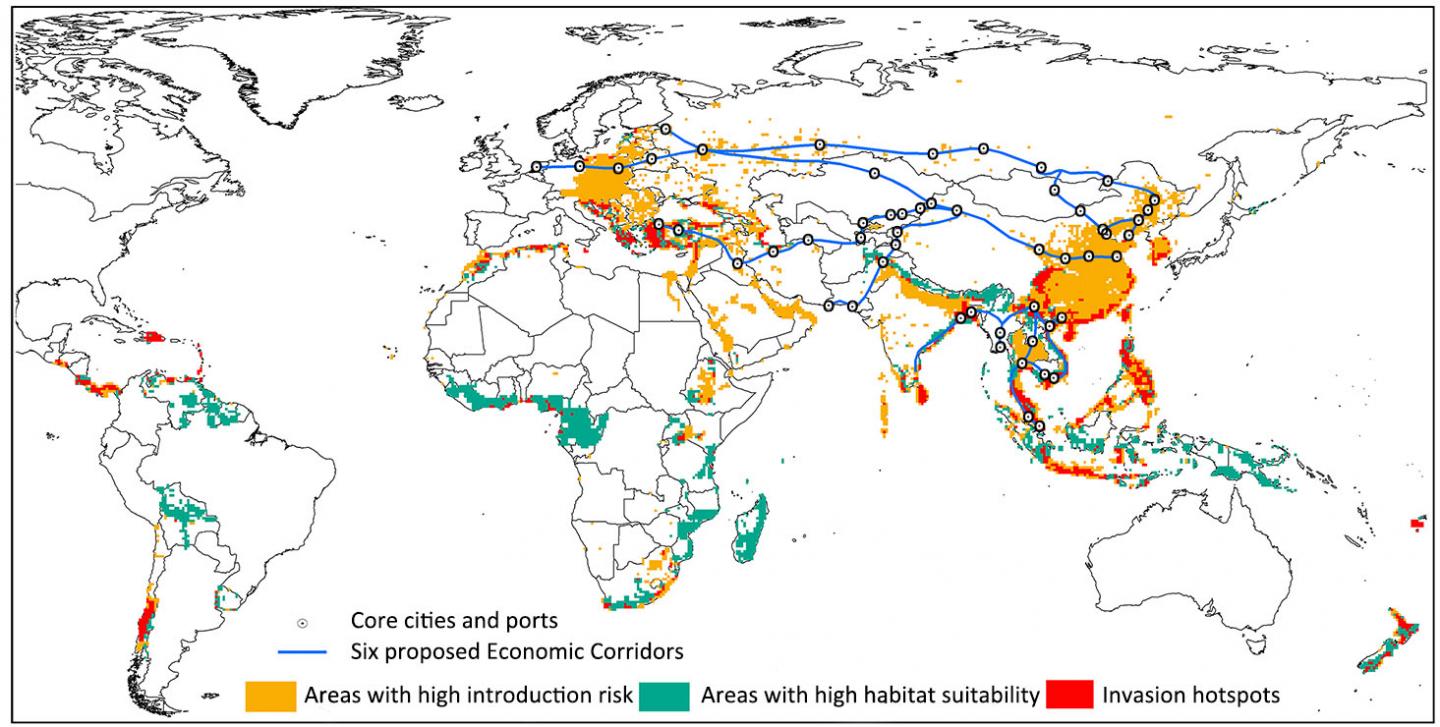 This map shows areas with risks of biological invasion on the Belt and Road.
LIU ET AL./CURRENT BIOLOGY

Laurance points out that the study only includes vertebrates. If one considers invertebrates such as insects as well as plants and pathogens, he adds, the potential effect of BRI on the route’s ecosystems is likely to be even greater. “It’s just one of many hidden dangers,” he says.

Changing global climate patterns are expected to bring additional environmental challenges, says Sambandampillai Sandilyan, a former fellow at the National Biodiversity Authority in Chennai, India, who studies invasive species. “Due to climate change, some regions are turning too cold and some too hot,” Sandilyan, who was not connected to the study, writes in an email. “To avoid such places, vertebrates migrate to new habitats where they get ideal temperature.” The BRI could facilitate such movement, he adds.

As many BRI countries may have limited resources, Li and his colleagues suggest the creation of a special fund to carry out biosecurity measures and research into the prevention and eradication of problematic species.

Laurance dismisses the idea of a fund, however. “It won’t work because it’s never worked,” he says. “For example, Australia expends incredible sums of money to stop invasive species, and we’re drowning in invaders here. The only strategy that really works is limiting human access. Anything else is like fighting cancer with a band-aid.”