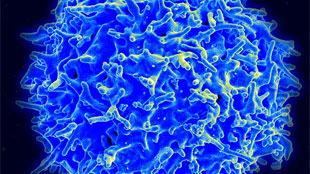 Human T-cellWIKIPEDIA, NIAID/NIHOur bodies are protected by white blood cells called T-cells that detect and destroy infections, tumors, and other threats. But these watchmen are themselves watched by regulatory T-cells, which suppress the proliferation of other T-cells and prevent our immune systems from turning against our own bodies.

Now, a team of Australian scientists has discovered a new type of these suppressors that are distinguished by a protein called CD52, which they produce in large quantities and release. These “CD52hi cells” appear to play a key role in type 1 diabetes. In humans with the disease, these cells are rare and ineffective at suppressing other T-cells. Furthermore, depleting these cells in diabetes-prone mice quickly triggers the disease.

“We can’t claim yet that these cells are important for preventing diabetes in humans, but the evidence suggests that they are,” said Len Harrison from the Walter & Eliza Hall Institute...

“This finding will assist in the development of targeted therapies to manipulate the immune response and improve human health,” added Jane Buckner from the Benaroya Research Institute in Seattle, who was not involved in the study. However, she added that we don’t know how important these suppressor cells are compared to more familiar types of regulatory T-cells.

The new discovery of CD52hi cells could also explain some puzzling side effects of alemtuzumab (or Campath)—an antibody that binds to CD52. Discovered in the 1980s, the drug has been used to successfully treat leukaemia and lymphoma—possibly because it stops cancer cells from using CD52 to suppress other T-cells and sneak past the immune system.

More recently, alemtuzumab has been used to treat multiple sclerosis, but some clinical trials have shown that 30 percent of patients who take the antibody develop a different autoimmune disease. This may be because the antibody lifts the suppressive effects of CD52hi cells, allowing pathogen-attacking immune cells to go off the rails. This may also explain why people on alemtuzumab tend to be protected against serious infections.

People with type 1 diabetes often produce antibodies against GAD65, one of their own proteins. Harrison’s team knew that injections of GAD65 can activate regulatory T-cells that prevent diabetes in mice. But when the researchers examined these activated cells, they discovered one unusual finding after another.

The T-cells activated by GAD65 differed from all known varieties. Their distinguishing feature was a high level of CD52, a protein with no clear physiological role that is thought to sit in the membranes of white blood cells. But the suppressive CD52hi cells can release CD52 to control other T-cells at a distance. Once it reaches other cells, it binds to the T-cell surface protein Siglec-10, one of several proteins that “have only been put on the map in the last decade,” said Harrison. “CD52 is one of the few known [substances] that works through them.”

So, these new cells act through mysterious protein that binds to an equally mysterious receptor through an unexpected route. “It’s surprising,” said Harrison, “and a new mechanism of suppression.”

This chain of events could be important for preventing type 1 diabetes. When Harrison’s team depleted CD52 from lymphocytes and injected the cells into young diabetes-prone mice, all of them developed diabetes within a month, far sooner than they normally would.

Conversely, boosting CD52hi cells, or perhaps targeting the Siglec-10 receptor directly, could be interesting new avenues for treating type 1 diabetes. But Harrison also thinks that the opposite strategy—blocking CD52—might be useful for boosting immune responses, and is now doing experiments to see if this phenomenon can improve vaccine effectiveness.