Thomson Reuters has released its 2009 Journal Citation Report, cataloging journals impact factors’, and shuffling in the top few spots have some analysts scratching their heads. Specifically, the publication with second highest impact factor in the “science” category is Acta Crystallographica - Section A, knocking none other than the New England Journal of Medicine from the runner’s up position.

This title’s impact factor rocketed up to 49.926 this year, more than 20-fold higher than last year. A single article published in a 2008 issue of the journal seems to be responsible for the meteoric rise in the Acta Crystallographica - Section A’s impact factor. “A short history of SHELX,” by University of Göttingen crystallographer George Sheldrick, which reviewed the development of the computer system SHELX, has been cited more than 6,600 times, according to ISI. This paper includes a sentence that essentially instructs readers...

“Without another, similarly important article in 2010, Acta Crystallographica - Section A is likely to return in 2011 to its prior Journal Impact Factor of between 1.5 and 2.5,” wrote Marie McVeigh, director of Journal Citation Reports and bibliometric policy at Thomson Reuters, in a discussion forum on the company’s website.

Number one stayed the same from last year’s to this year’s list—CA: A Cancer Journal for Clinicians. Other surprises in this year’s impact factor roundup include:

(Editor’s note 21st June: Marie McVeigh was incorrectly referred to as a Thomson Reuters blogger in the original version of this story. The mistake has been corrected above. The Scientist regrets the error.) 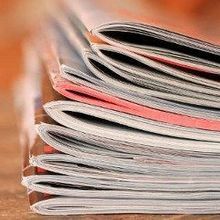