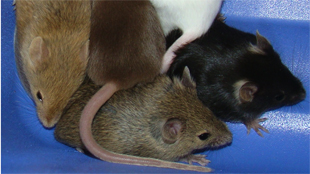 In the beginning, the mice were few and far between. In 2001, over beers at a conference, a group of geneticists dreamt up the ideal resource for systems genetics—a mouse population bursting with genetic diversity, far more than traditional inbred lab strains. Such a resource would better model human diversity and disease in the lab, they surmised. But no one was willing to supply the $50 million they estimated it would cost, so Gary Churchill of the Jackson Laboratory in Bar Harbor, Maine, began breeding the mice, alone and sans funding, in his lab.

Soon, Churchill had enough mice to ship to collaborators in Tennessee, Kenya, and Australia, who also began the breeding process. Thanks to that dedicated group of scientists, the Collaborative Cross (CC) was born—a population bred from 8 founding mouse strains, including 3 wild type strains, to...

Today, the project has finally found a home at the University of North Carolina at Chapel Hill (UNC-CH), where over 450 resulting CC strains are completed or in development. Each strain has been fully genotyped, and the resource is now ready, its creators say, to help scientists unravel the genetics behind complex traits like cancer, aging, fertility, and more.

Last week, the first publications using the CC mice hit the press. Two journals, Genetics and G3: Genes/Genomes/Genetics, published a series of 15 articles demonstrating how the CC mice—and a companion resource called the Diversity Outbred (DO) mice—are being put to use. Simultaneously, UNC-CH launched a website where scientists can order the mice and download their genotypes.

“The complex trait problem is a hard one. How do you solve diabetes or figure out how heart disease works?” said Lauren McIntyre, a geneticist at the University of Florida and senior editor of Genetics, who was not involved in the creation of the CC. “Having a resource that is more reflective of human complexity and gets us closer, faster, to some of the solutions is a great thing.”

“Most of the resources we’ve had for mammalian genetics either had not enough genetic variation or [that variation] was not uniformly distributed,” said Fernando Pardo-Manuel de Villena, who heads the CC project at UNC-CH. “Every gene of the mouse genome in the Collaborative Cross has at least two different forms. That’s extremely powerful.”

One of the early adopters of the CC was Francis Collins, director of the National Institutes of Health. In this month’s issue of G3, Collins and colleagues use CC mice to investigate various blood traits, including red and white blood cell counts and hemoglobin concentration, traits that have long been of interest to researchers studying severe red blood cell diseases such as sickle cell disease and anemia. The genetics of these traits is not unexplored: numerous genetic loci associated with hemoglobin and blood cells have been previously identified, said Samir Kelada, a postdoc in Collins’ lab. “But by studying them in this new population, the idea was that maybe there is more to learn, so let’s see what we can find.”

The team analyzed the 8 founding CC strains and 131 additional strains to map loci associated with red cell volume, white blood cell count, percentage of lymphocytes, and monocyte number. The mice showed an impressive range of phenotypes for these parameters, said Kelada, including phenotypes in between those observed in the 8 founding strains.

Using the mice, the researchers identified two previously reported loci for red blood cell volume and identified a new locus for each of the three other traits. Kelada attributes the success of the project not only to the diversity of CC genomes, but how that diversity is spread out in the genome. “The way they designed the mice resulted in equal distribution and diversity across the genome,” said Kelada. “It’s not just clustered in one region of the genome, but is spread out evenly. It makes the likelihood of finding [genes] higher.”

In a second G3 study, Shannon McWeeney and colleagues at Oregon Health & Science University used 44 CC strains to study the genetic basis of host response to flu infection. Knowledge of how and why individuals respond differently to infection is critical for vaccine development, said McWeeny.

Each strain was infected with influenza A virus, and the team observed a range of extreme reactions to the virus, from healthy-looking, asymptomatic mice to skinny animals with lung damage. In contrast, standard inbred laboratory mice infected with influenza A all respond the same depending on their strain, such as uniform levels of weight loss, said McWeeney. “The CC was critical for us because it had variation in immune response similar to levels you’d see in a human population,” she said.

Through gene expression profiling, the team identified 2,671 gene transcripts that were differentially expressed between mice that showed a severe response and those with a mild response to infection. Of the transcripts that were associated with the phenotype, 21 loci appeared to directly regulate host response to infection. The team then built a model of how those 21 genes might interact, which they now plan to test and refine. “This study is a first step,” said McWeeney, who plans to continue working on CC mice in the future.

Outside of influenza, the experiment provides a framework that can be applied to other infectious diseases and complex traits that have a diverse array of phenotypes, she added. “We really never attempted anything like this before, [and] it turned out to be an amazing success.” The other 13 studies published in Genetics and G3 include a perspective on the last 10 years of the CC, a detailed analysis of the population’s genome architecture, numerous papers exploring methodologies to breed and analyze the mice, and the identification of genes influencing cholesterol, blood pressure, and the brain’s reaction to clozapine, a schizophrenia drug.

The resource still faces hurdles, of course. Analyzing the genomic data from tens or hundreds of mice strains in a single experiment is not easy, said Churchill, and hopefully new analysis methods will evolve as researchers use the mice. In addition, the project lacks a database to store and share phenotypic data about the mice. Churchill’s lab is taking a stab at that challenge already, beginning with extensive phenotyping of the 8 founding strains.

But as more researchers begin to use the mice, the better the resource will become. In addition to the research represented by the current publications, numerous scientists have submitted grants to the NIH for projects using the CC strains, said Churchill, and orders for both the CC and DO mice have begun to flow in. “People are going to be using [the CC mice] for all kinds of phenotypes,” said Kelada. “We’re going to see a lot of research coming out exploring not just the biology but the methodology of using these mice.”

Researchers who to purchase CC or DO mice pay only a small fee to maintain the breeding facilities, and the genotype information is free. The resource could be paradigm shifting for systems biology, said McIntyre. “People can do things they haven’t even thought of before,” she added. “It will change how people envision [mouse] studies.”