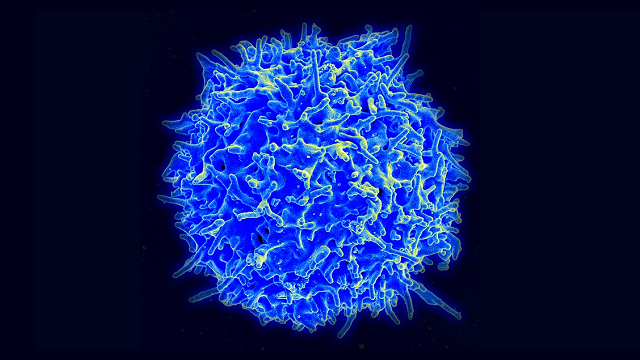 A human T cellWIKIMEDIA, NIAID, NIHOvarian cancer is a particularly hard-to-treat disease. It’s often diagnosed late, and even after surgery and chemotherapy, around 85 percent of patients relapse and develop chemoresistance. But a preliminary clinical trial, carried out by researchers at the University of Pennsylvania, has shown promising results for a new type of vaccine that aims to boost patients’ immune systems to fight the disease. The findings were published yesterday (April 11) in Science Translational Medicine.

“This vaccine appears to be safe for patients, and elicits a broad anti-tumor immunity,” study coauthor Janos Tanyi of the University of Pennsylvania’s Perelman School of Medicine says in a statement. “We think it warrants further testing in larger clinical trials.”

The researchers focused on patients with recurrent advanced epithelial ovarian cancer, which has a five-year survival rate of around 17 percent. First, the team extracted dendritic cells—antigen-presenting...

Otis Brawley, chief medical officer of the American Cancer Society tells CNN that the study “clearly justifies a larger clinical trial.” But he also cautioned against overstating the promise of the team’s personalized approach compared to tried-and-tested treatments. The public “often wants to pass up better-proven conventional therapy for an unknown in immunotherapy,” he says.