The COVID-19 pandemic has led to a steep drop in blood donations, leading blood centers in the US to raise the alarm about critical shortages, laying bare the fragility of the current blood supply. For years, scientists anticipating disruptions to the blood supply—due to issues such as emerging pathogens that can be transmitted through blood or the rapidly aging population, which could drastically reduce the number of potential donors in the future—have been working on developing ways to produce blood in factories in order to provide an alternative source of the vital substance.

In a study published December 10 in Stem Cell Reports, Steve Oh, the director of the Stem Cell Bioprocessing group at the Agency for Science, Technology and Research (A*STAR) in Singapore, and his colleagues report a new method to generate large quantities of red blood cells (RBCs) from induced pluripotent stem cells (iPSCs), cells that have been reprogrammed from a differentiated state back to an embryonic-like state.

Oh and his colleagues set out with the mission of finding ways to manufacture RBCs—which alone are sufficient for blood transfusions—from iPSCs at scale in 2015. At the time, Oh says, the available approaches were unable to develop enough high-quality immature blood cells, called erythroblasts, to expand and mature in large bioreactors—one of the reasons being that scientists were primarily using monolayer cultures, which limited how much the cells could grow. “We wanted to push the bioprocessing technology as far as we could, with the endpoint of being one day able to make off-the-shelf universal blood,” Oh says.

Oh’s team set out to develop a scalable method for generating type O-negative, or universal donor, blood cells. To do so, they attached the iPSCs derived from various tissues to supportive structures called microcarriers that enable their growth, then placed them in cell cultures that were under constant agitation (by shaking or stirring, for example). Growing dense cell cultures requires high levels of nutrients and oxygen, and a continuously agitated environment offers more of those critical components to reach the growing cells than a static environment does, Oh explains. (Oh has patents for the techniques used in this study, and is the founder of Zenzic Labs and SingCell, two Singapore-based biotechnology companies working with stem cells.) Throughout this process, different cocktails of cytokines were added at various stages to induce differentiation into erythroblasts.

The team repeated this protocol in culture platforms of different sizes—beginning in plates with 5 mL individual wells and ending with 500 mL spinner flasks, which, according to Oh, are surrogates for controlled, small-scale bioreactors.

Using this technology, Oh and his colleagues generated cultures of erythroblasts with cell densities reaching 1.7 x 107 cells per mL. In addition, they demonstrated that it was possible to carry out this process using iPSCs from eight different cell lines, including those derived from umbilical cord blood, bone marrow, and skin.

To reach the quantities of RBCs found in transfusions, scientists need to achieve densities of at least 1 x 108 cells per mL—which is still an order of magnitude larger than what Oh’s team has currently been able to achieve.

For erythroblasts to become RBCs, they need to go through enucleation—the process through which the cell loses its nucleus. Oh’s group achieved up to 60 percent enucleation in their cell cultures using one of the current leading techniques for enucleation, which involves adding OP9 cells, bone marrow–derived stem cells from mice. The entire process from iPSC starting material to mature RBCs took around 35 days.

When the team compared the RBCs generated from iPSCs to those derived from adults, they reported minimal differences in crucial functions such as oxygen-carry capacity, as well as in their transcriptional profiles.

“This demonstrates, for the first time, that you can produce red blood cells starting from iPSCs, and with a range of donors, all the way to the final end product in a controlled suspension environment,” Oh says.

Showing that this process of going from iPSC to erythroid cells can be carried out in spinner flasks is a big step, says Emile van den Akker, a scientist studying erythropoiesis at Sanquin, a not-for-profit organization that supplies blood in the Netherlands, who was not involved in this work. Transferring a static culture to something that can be used in a scalable bioreactor is “the real strength of this paper.” 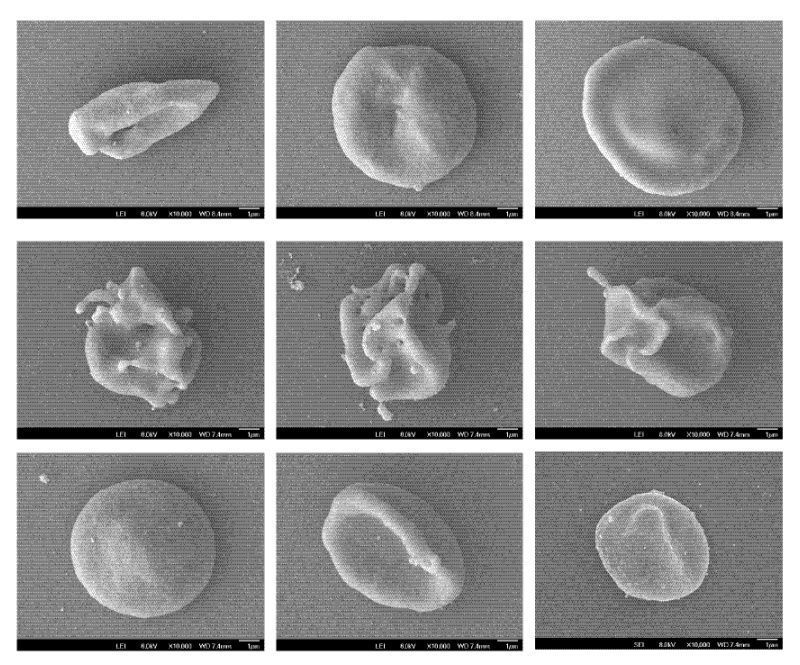 Many teams have been looking for methods to generate red blood cells from stem cells for transfusion purposes, and the biggest challenge remains scaling up to mass production, says Luc Douay, a professor at Sorbonne University in France and the president of the biotech startup Erypharm, which is working on ways to generate red blood cells for transfusion and was not involved in this study. “It’s an interesting paper,” Douay says. But the authors do not report large-scale production or “address the question of how this process can be scaled up.”

To reach the quantities of RBCs found in transfusions, scientists need to achieve densities of at least 1 x 108 cells per mL—which is still an order of magnitude larger than what Oh’s team has currently been able to achieve. Currently, the technique’s maximum cell density appears to be what the team achieved in the study, according to Oh. However, Oh says he is hopeful that his team will be able to reach the levels required for transfusion. One approach they are pursuing are ways to immortalize their erythroblast cells lines so that they will continually proliferate and thus generate more cells—as well as save the time and money it takes to always start with iPSCs.

Lab-generated erythrocytes could be useful in other ways. Scientists are also looking at methods to load them with specific therapeutics that could, for example, be used in chemotherapy or to clear toxins from the plasma. Because these applications may not require the volumes of blood needed for transfusions, “this is where I see the quickest translation to a product,” van den Akker says. Still, “the ultimate goal, of course, is transfusion blood.”