The Bombali Ebola virus was identified in bats in Sierra Leone, and there’s no evidence that it has infected people or causes human disease.

ABOVE: Colored transmission electron micrograph of an ebolavirus virion, a member of the same family as the newly discovered virus
WIKIMEDIA, CDC/CYNTHIA GOLDSMITH

Researchers have discovered a new species of Ebola in bats in Sierra Leone, the country’s government announced last week (July 26). Named “Bombali” after the region in which it was found, the virus has not yet been identified in humans, but could still pose a health risk.

“At this time, it is not yet known if the Bombali Ebola virus has been transmitted to people or if it causes disease in people,” Amara Jambai, a senior ministry of health official, tells AFP. “But it has the potential to infect human cells.” 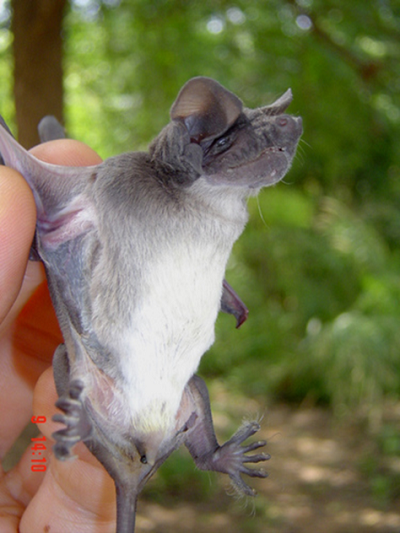 An Angolan free-tailed bat, one of the species carrying the new virus
inaturalist, jakob fahr

The research, which was carried out by scientists at Columbia University, the University of California, Davis (UCD), and nonprofit...

Researchers identified the new virus via fragments of RNA in two species of bats that are widely found across Sub-Saharan Africa. From the RNA fragments, the team was able to reconstruct most of the viral genome, which revealed enough differences from the five existing Ebola viruses to indicate a new species.

The genome also revealed that the virus possesses a protein on its exterior that likely allows it to infect human cells. But “just because it enters human cells doesn’t mean it will cause human disease,” Stuart Nichol, chief of the viral special pathogens branch at the Centers for Disease Control and Prevention (CDC), tells STAT.

CDC researchers are now working to extract a whole infectious virus from samples taken from the bats in Sierra Leone. In the meantime, researchers are advising people living in the Bombali region to avoid bats.

“We don’t really know where on the spectrum [the Bombali virus] stands,” UCD pathologist Tracey Goldstein tells Science News. For now, “I don’t think people should be alarmed.”