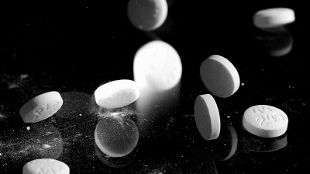 Salicylate, the natural compound on which aspirin is based, directly activates a pathway linked to tumor suppression and glucose regulation, which may explain some of aspirin’s long-term health benefits, such as its role in cancer prevention. Published this week (April 19) in Science, the research shows that salicylate directly activates AMP kinase, which regulates a cell’s ATP levels, which in turn promotes fat burning in mice.

“It’s a very important paper” that sheds light on the mechanism of aspirin’s in vivo effects, said Q. Ping Dou, who studies the chemotherapeutic potential of natural products at Wayne State University in Michigan, and was not involved with the study. Salicylate is only the second compound known to directly activate AMP kinase, which regulates energy supplies in the cell, Dou explained.

Low-dose aspirin, already known for its heart-protective effects, has gotten recognition recently for helping to prevent...

AMP kinase helps regulate a cell’s energy balance, shifting cellular efforts towards generating more ATP when stores run low, and can be activated by exercise. The AMP kinase pathway has been implicated in cancer, diabetes, appetite control, and circadian rhythms. Already two diabetes drugs, metformin and thiazolidinediones, stimulate AMP kinase, and other work shows that a variety of natural compounds, like resveratrol and EGCG, also activate the kinase. Given AMP kinase’s critical role in cell metabolism, “any effect [of salicylate] on AMP [kinase] does have implications,” LeRoith said.

Indeed, when Grahame Hardie at the University of Dundee in Scotland and colleagues added increasing doses of salicylate to a human embryonic kidney cell line, they saw an increase in AMP kinase activity. Salicylate could still activate AMP kinase when a subunit of the kinase was mutated such that it could no longer respond to changes in AMP and ADP concentration, suggesting that salicylate acted directly upon AMP kinase.

Only one other compound is known to directly activate AMP kinase. A-769662, a synthetic compound that prevents the dephosphorylation of the kinase, popped out of a screen of 700,000 potential AMP kinase activators done at Abbott Laboratories. Salicylate blocked A-769662’s activation of AMP kinase, suggesting that it bound to the same or a nearby site. Mutating this site prevented both compounds from activating AMP kinase.

“It’s ironic that here’s a natural compound we’ve been exposed to for thousands of years that directly activates AMP kinase,” after a multi-million-dollar screening effort produced only one, said Hardie.

Because AMP kinase is such a critical regulator of cellular processes, Hardie turned to and Gregory Steinberg at McMaster University in Ontario, Canada, to investigate salicylate’s effects in vivo. Compared to mice with a mutated subunit that prevented salicylate from binding and activating AMP kinase, Steinberg’s group found that salicylate prompted wild type mice to burn fatty acids. Surprisingly, salicylate lowered blood glucose levels in wild type and mutant mice, suggesting there are other targets of salicylate.

Storing fat in muscle or liver cells is generally associated with insulin resistance in sedentary people, said Barbara Kahn, who investigates the mechanisms underlying diabetes at Beth Israel Deaconess Medical Center and Harvard Medical School in Boston. Thus, targeting AMP kinase with salicylate may turn out to be a promising route to drug development for diabetes. But doses necessary for regulating blood glucose can come with nasty side effects, Kahn noted, including gastrointestinal bleeding and tinnitus, and activating AMP kinase in the hypothalamus actually increases food intake and body weight. In the current study, the researchers only observed the mice for short periods of time, and other effects of AMP kinase activation by salicylate could show up in longer-term studies, she said.

Thus, high dose aspirin is not a panacea, cautioned Kahn, and no one should be stocking up on aspirin in the hopes that it will lower their glucose, burn fat, and prevent cancer all at once. “The main point is that they’ve identified a pathway,” Kahn notes, which may enable scientists to develop safer, more potent drugs in the future.

While much research stands between this study and a new AMP kinase-targeted drug, “[it’s] a very good start,” agreed Dou.