ABOVE: An illustration showing what Galagadon would have looked like swimming along the riverbed
© VELIZAR SIMEONOVSKI, FIELD MUSEUM

An ancient shark species once swam in the rivers of present-day South Dakota, researchers reported yesterday (January 21) in the Journal of Paleontology.

The fossils came from the Hell Creek Formation in South Dakota, where Sue, the largest and most complete Tyrannosaurs rex, was found. A volunteer at the Field Museum, where Sue resides, discovered the shark’s teeth in sediment left over from when the dinosaur’s bones were pulled from the ground.

“Most of its body wasn’t preserved, because sharks’ skeletons are made of cartilage, but we were able to find its tiny fossilized teeth,” says Pete Makovicky, one of the authors and the curator of dinosaurs at the Field Museum in Chicago, in a statement.

The shark’s moniker Galagadon comes from its teeth’s resemblance to the spaceships of the 1980s video game Galaga. The teeth are tiny—just a millimeter wide. And this shark, a relative of modern-day carpet sharks, would have also been small, between 12 and 18 inches long.

“Galagadon was not swooping in to prey on T. rex, Triceratops, or any other dinosaurs that happened into its streams. This shark had teeth that were good for catching small fish or crushing snails and crawdads,” says Terry Gates, one of the paper’s authors and a paleontologist at North Carolina State University and North Carolina Museum of Natural Sciences, in a statement.

“It’s comparable to bamboo sharks living today. It probably had a flat face and was very likely camouflage-colored, since its relatives today have a camouflage pattern. It would have eaten small invertebrates and probably spent a fair amount of time lying on the bottom of the riverbed,” says Makovicky.

The scientists say that Sue and Galagadon lived at the same time and the shark’s presence among the sediment’s fossils is making them rethink what they knew about the landscape.

Sue’s terrain was thought to include a lake, but with Galagodon’s discovery, it now seems the area was connected to a marine environment. “This wasn’t some Sharknado event—these animals were making their way up rivers from the sea,” says Makovicky. 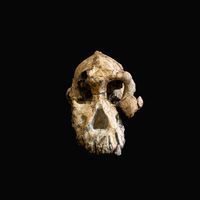