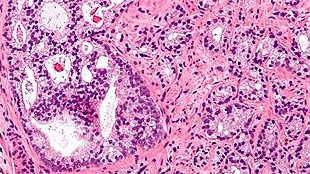 Cancer’s got a new enemy—drugs that block autophagy, the process of cellular cannibalism that is increased in many cancer cells. Presenting at AAAS, Ravi K. Amaravadi, an assistant professor of Medicine at the Perelman School of Medicine and Abramson Cancer Center at the University of Pennsylvania, argues that blocking the cell’s ability to degrade and recycle proteins can enhance a variety of cancer treatments.

Amaravadi and others have shown that hydroxychloroquine (HCQ), an approved malaria and rheumatoid arthritis treatment, can do just that. Laboratory models of treatment-resistant cancers and ongoing clinical trials have demonstrated that HCQ can enhance antitumor activity when combined with chemotherapy, targeted therapy, radiation, and immunotherapy.

“Our assays performed on human blood and tissue samples indicate that high doses of HCQ are required to block autophagy in patients, and in some cases, such as in a brain tumor trial, these... This photograph shows the cataracts in a child’s eyes due to Congenital Rubella Syndrome (CRS).
WIKIMEDIA COMMONS, CDC

How does vision develop in babies with cataracts? While surgery and contact lenses can “correct” their vision, McMaster University psychologist Daphne Maurer presented evidence last week that their visual experiences still differ from those of healthy individuals, even into adulthood. But there is hope. Maurer suggested that these deficits can be reversed with the help of a video game.

“After playing an action video game for just 40 hours over 4 weeks, the patients were better at seeing small print, the direction of moving dots, and the identity of faces,” Maurer said in a press release. “Those improvements tell us that the adult brain is still plastic enough to be trained to overcome sensory deficiencies.”

Can researchers make the natural process of photosynthesis more efficient, in order to design new biofuels or boost crop production? Given that the natural process boasts less than 1 percent efficiency in many important crops, some scientists see plenty of room for improvement.

“We are facing global challenges in food and energy security that must be addressed,” Douglas Kell, Chief Executive of Biotechnology and Biological Sciences Research Council (BBSRC), said in a press release. “Improving photosynthesis within plants, or externally using synthetic biology, would bring huge benefits.” One person hoping to make such improvements is Richard Cogdell of the University of Glasgow. Using synthetic biology, Cogdell is attempting to build an artificial “leaf” that could converting the sun's energy into liquid fuel. The technology will work by using a chemical reaction similar to natural photosynthesis, but will harness it in an artificial system that can better extract the energy. “The sun gives its energy away for free but making use of it is tricky,” Cogdell said in the release. “We are working to devise an analogous robust chemical system that could replicate photosynthesis artificially on a grand scale.”

The University of Cambridge’s Howard Griffiths is focusing on an enzyme called RuBisCO (Ribulose-1,5-bisphosphate carboxylase oxygenase), the key enzyme in photosynthesis that allows plants to create energy-rich molecules from atmospheric carbon dioxide. Griffiths is looking to harness the power of “biological turbochargers,” molecules that work by concentrating carbon dioxide around RuBisCO for optimal photosynthesis. “We want to improve the operating efficiency of RuBisCO in crops and we believe algae may one day provide the answer,” Griffiths said in the release. “By combining algal and plant photosynthesis to improve photosynthetic efficiency, we would see an increase in agricultural productivity for the production of food and renewable energy."

Anne Jones from Arizona State University is working with photosynthetic cyanobacteria to trap solar energy, taking the wasted energy of the cyanobacteria and transferring it to a fuel-producing cell. “We want to couple the photosynthetic apparatus in one bacterial species to the fuel-producing metabolism of a second species,” Jones said in the release. “We could then funnel excess energy directly into fuel production. It would see two biological systems working together to make fuel from the sun's energy.”

“Scientists have made great advances since mapping the human genome 10 years ago, but our next frontier is mapping and understanding the function of all proteins in the human body,” University of British Columbia researcher Chris Overall said in a press release.

Launched in 2010, the Human Proteome Project has brought together an international team to map all 5 million human proteins, breaking the overwhelming task into 24 chapters that correspond with the 22 pairs of autosomes and two sex chromosomes, the X and the Y.

And already, the results are rolling in. Overall’s group, for example, has deciphered the role of a family of enzymes called metalloproteinase in the human immune response, and has discovered a protein that works to direct white blood cells to the site of injury and infection. Overall and his colleagues have also identified proteins whose roles vary dramatically depending on where they're found in the cell or body.