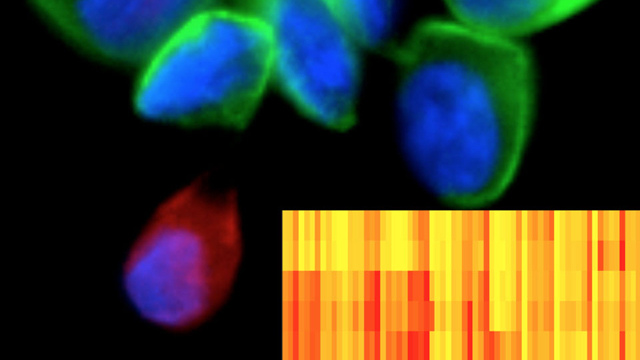 New technique generates detailed protein-expression profiles (inset) of cancer cells (background)COURTESY OF RALPH WEISSLEDERThe technique: Researchers from Massachusetts General Hospital have developed an approach that enables the in-depth characterization of the proteins present in small numbers of cells. The antibody barcoding with photocleavable DNA (ABCD) platform, which the team described today (January 15) in Science Translational Medicine, first involves passing collected cells through a microfluidic device that uses antibodies to bind to isolate cells of interest—in this case, cancer cells. The target cells are then incubated with a cocktail of more than 90 antibodies attached by a photocleavable linker to DNA “barcodes”—specific 70 nucleotide long sequences from the potato genome, which were chosen to avoid cross reactions with human DNA. Next, the unbound antibodies are washed away, and the linkers on the remaining antibodies are cleaved both enzymatically and with UV light. The linkers can then be...

The team validated its ABCD platform as a profiling tool in both cell lines and in cells from human cancer patients, before and after they underwent treatment. The ABCD platform accurately profiled protein expression even in single cells. “This technology . . . enables one to do much more comprehensive analysis on way fewer cells,” said senior author Ralph Weissleder, who directs the Center for Systems Biology at Mass General.

What’s new: Traditional methods for assessing protein levels in cancer samples are time-consuming and require large amounts of tissue or amplification, which can both skew results. The ABCD platform analysis can be completed in a matter of hours, instead of the days that traditional immunohistochemistry approaches take. It also avoids amplification.

“Here you’re able to, in combination, use many, many selective antibodies and screen them in a very sensitive manner,” said Mark Rubin, who directs the Institute for Precision Medicine at Weill Cornell Medical College and New York Presbyterian Hospital, and was not involved in the research. “The use of technology where you don’t need to amplify the sample also probably limits the artifact of having to increase the signal so you can find something.”

The researchers chose the 90-plus antibodies in the cocktail to cover control proteins, as well as those associated with pathways often perturbed in cancer and those that are commonly used in diagnostic tests. “There are a lot of ripple effects as a result of [cancer] drugs,” said coauthor Cesar Castro, the director of the cancer program at the Center for Systems Biology at Mass General. He added that unpredicted pathways are most likely affected by drug treatment, “but you don’t see that in your 10 or so markers of immunohistochemistry, so you lose a lot of information.” The substantial increase in the number of markers the new tool provides “allows us to not just look at key nodes in the pathways, but to look at other relevant pathways.”

In order to look at RNA, DNA, and protein levels in a sample, conventional approaches dictate splitting the sample and looking at RNA and DNA in one half, and proteins in the other. Because the divided samples are likely heterogeneous, examining them separately does not allow scientists to get a fine-tuned look at expression profiles. But using the ABCD platform, it is possible to look at DNA, RNA, and proteins in the same cell population. “The technique allows you to do integrated cancer cell profiling all within the same time frames,” said Weissleder.

Importance: The hallmark of the ABCD platform is the ability to look at protein expression in small numbers of cells. Patients who undergo repeat core biopsies, which extract large numbers of cells, are in danger of infection and bleeding. Fine needle aspirates collect far fewer cells. Castro compared the experiences to being poked by a sharpened drinking straw versus the tip of a pin.

“In the daily practice of precision medicine, we have a number of hurdles that we have to face,” said Rubin. “We have to be able to accurately determine the genetic changes of a patient’s tumor cells, we have to be able to do this during the course of their treatment, and we also need to do it in the least invasive manner possible. This technology addresses all of those challenges.”

Needs improvement: Although the study has established proof of concept, experts agree that the technology needs more validation. “It’s the earliest observation that suggests that [the technology] works,” said Rubin. “Now it needs to be put through the rigor of field testing, and it also has to be put into other peoples’ hands because it needs to be shown that it can work in other laboratories.”

Jeremy Rich, chair of the department of stem cell biology and regenerative medicine at the Cleveland Clinic Lerner Research Institute, who was not involved in the current study, cautioned that because most of the work in the paper is cell line-derived or performed on a small number of patients, there may be some bumps along the road when the technique is tested on a larger scale. “But it would be exciting to say that we have a series of 90 antibodies that are barcoded that could be very useful in understanding the activation state of the pathways at baseline and after treatment,” he said.