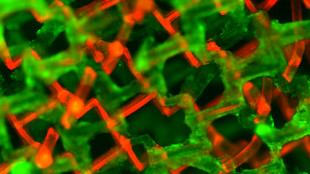 The technique: To rapidly assemble and disassemble engineered tissue in culture, researchers at the University of Toronto have designed a system of biocompatible scaffold sheets that, once covered in cells, can be layered together and pulled apart like Velcro. Announcing their technique in a Science Advances paper published today (August 28), the researchers describe the use of “Tissue-Velcro” to build 3D heart tissues that beat spontaneously and synchronously.

“The heart is made pretty much like layers of cells stacked on top of each other, so what this paper is [describing] . . . is these layers of scaffold that have heart cells and endothelial cells and that have a clever way of being linked together,” said Ali Khademhosseini of Harvard Medical School who develops biomaterials for tissue engineering, but who was not involved in the study.

However, “all of the other methods that were available were not adequate,” said Milica Radisic, the Toronto tissue engineer who led the new study. One problem with the printing approach, she said, is that although the cells can be precisely positioned, they are not immediately functional—it takes time to establish the cells’ morphologies and connections. “With our Tissue-Velcro approach you can have these individual thin layers premade and, say, even at the time of surgery you could stack it to the desired height and it would be immediately functional.”

Another limitation of existing approaches is that assembly of the engineered tissue is essentially irreversible. “If you want to take the cells out . . . you have to actually cut it open. Basically you are destroying the tissue,” said Radisic. With Tissue-Velcro, however, scientists can pull the layers apart with tweezers.

And that rapid disassembly is valuable for basic research questions, explained biomedical engineer Lauren Black of Tufts University, who did not participate in the study. For example, different cell types on separate layers could be snapped together, cocultured, and later taken apart for analysis. “It allows you to look at how cells in a particular environment might be responding with respect to each other without having to go through a lot of work to try and separate them,” Black said.

What’s new: The Tissue-Velcro sheets were made from a biocompatible, biodegradable elastic polymer molded into an approximately 130 micrometer (µm)-thick honeycomb-like mesh with hooked posts, approximately 315 µm tall, rising perpendicularly. The hooks are designed to snag onto the honeycomb mesh of an overlying sheet.

It will probably be quite some time before such engineered tissues could be used to fix patients’ heart injuries, said Black, but “much of tissue-engineering nowadays is a push towards developing in vitro models of tissues for drug discovery [and more] . . .  so in that case, it is something that could be useful more immediately.”

Tissue-Velcro was designed specifically for growing cardiac tissue, said Miles Montgomery, a PhD student in Radisic’s lab who led the study together with fellow PhD student Boyang Zhang. However, it could theoretically be used for a variety of cell types, Montgomery said. “That’s research, right? You build off of what others have done . . . so I’m excited to see what other people might use it for.”