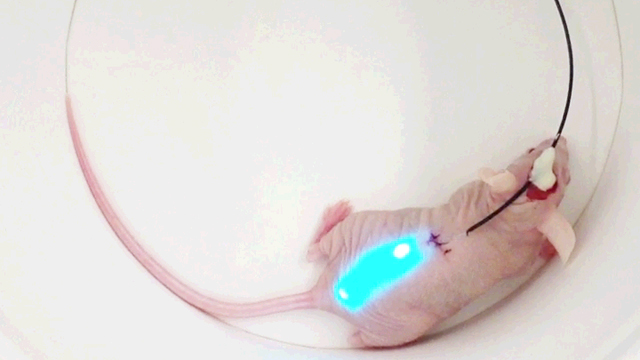 Mouse with light-guiding hydrogel implantM. CHOIThe device: Seok Hyun Yun, Myunghwan Choi, and colleagues have combined genetic engineering, small cellular scaffolds, and optogenetic principles to develop “light-guiding hydrogels.” The researchers engineered the hydrogels—which are made of water, cell media, and biopolymers—to be flexible and clear, so that they serve as a waveguide for light. After creating hydrogels containing HeLa cells, the researchers attached a fiber optic cable, and transplanted the four-centimeter long hydrogels subcutaneously in mice. They showed in vivo that the constructs could both detect fluorescent proteins expressed by the cells and stimulate the cells using light transferred to the fiber optic cable to suppress high blood glucose levels in diabetic mice. Their work was published today (October 20) in Nature Photonics.

“We only showed one example each of light sensing and therapy, but there are over 20,000 functional proteins in cells,” said first author Choi,...

What’s new: “People have done cell-based therapies. People have done hydrogel-based therapies. People have combined cells and hydrogels together, but the ability to stimulate [the cells] optically, and to do it in a controlled manner—using the properties of the hydrogel as a waveguide—is innovative,” said Michael Pishko, a professor of biomedical engineering at Texas A&M University, who was not involved in the work.

Hydrogels have been used for drug delivery before, and some of them are even approved by the Food and Drug Administration. There are, likewise, whole fields devoted to developing cell engineering and optogenetics approaches for therapeutic use. “There’s nothing we actually had to build or invent,” said senior author Yun, who is an associate professor at Harvard. “We put together somewhat disconnected, beautiful technologies to make [them] work in a single system . . . and then found a way to make it all work inside the body,” he added.

Importance: The development of cell-based therapies to treat disease is ongoing, but rife with challenges. It is extremely difficult, when injecting cells into a mouse or human patient, to confirm that they are going exactly where and doing exactly what they should be. Dosage is also a problem, as it is hard to tell how many cells will survive and whether they will function properly in vivo. Cells can be genetically engineered to express photoactive proteins that respond to light, but getting the light to the cells once they are in the body is a challenge because the optical properties of most tissues are not conducive to the movement of light.

The light-guiding hydrogels offer solutions to these problems. In an implanted hydrogel, the location of the cells is known. Plus, by allowing the cells to both receive and send light-based messages through the clear material, the hydrogel “maximizes communication efficiency” between the cells and the outside world, according to Yun. He added that the hydrogels present the ability to carefully control how active a cell is in releasing a protein, for instance. The hydrogel plays another important role: it helps the cells survive inside the body and stabilizes their environment.

Needs improvement: There is still work to be done before light-guiding hydrogels are ready for the clinic. “There are a few things to be further refined and developed to make it really considered practical,” said Yun. One possible roadblock is the cell engineering that will be necessary for this technique to be relevant therapeutically.

“The cells they used are HeLa cells. They are potentially tumorigenic,” said Warren W.C. Chan, who was not involved in the work, but coauthored an accompanying news and views article. “It could create problems.” Chan, who is a professor at the Institute of Biomaterials and Biomedical Engineering at the University of Toronto, said that the safest way to proceed would be to use cells specific to each patient. “That takes time to develop,” he added.

“I think it’s a very good piece of work, but there are a lot of challenges that need to be worked out,” added Pishko. “One is, how are implanted cells going to influence . . . the ability of these materials to waveguide?” Biodegradability, he added, may also be a problem. “The ability to couple light into the gel in different in vivo geometries is [another] challenge. I can envision this working if the gel is a thin film, but what happens if you start to look at things that have different geometries?”

In spite of the caveats, the work is reflective of the future of integrating natural cells with new technologies. “I think this is where the field is moving,” said Chan. “It’s trying to figure out how to manipulate things in the body.”