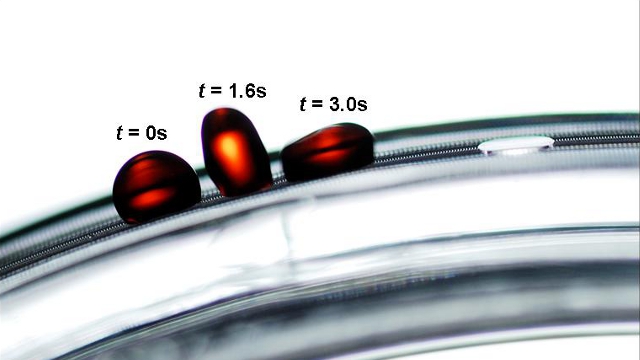 A red colored droplet inching across a curved track COURTESY OF THE BOHRINGER LAB, PHOTO BY MICHAEL ISAACS

The Device: Although nature can inspire great design solutions, it often needs a bit of tweaking. When researchers at the University of Washington wanted to create a system to move miniscule amounts of liquid, they looked to the lotus leaf with its extremely hydrophobic surface for inspiration. But while water can move along the leaf’s surface without getting stuck, there is no way to control its flow—a necessary quality for designing small portable biomedical devices.

The researchers first created a hydrophobic surface that mimicked the lotus leaf by building micro-scale pillars whose surface texture helped keep water droplets spherical. Amidst those pillars they added a track of arched lines, like a stack of parentheses, which helped the droplets stay in place.  The researchers could make the droplets move forward along the track...

“This is an interesting new way to create new kinds of structured surfaces to be able to manipulate droplets in various directionalities,” said Evelyn Wang, a mechanical engineer from Massachusetts Institute of Technology who was not involved in the study.

What’s New: Earlier concepts for moving distinct droplets of liquid involve applying electricity or heat to the sample, which can alter the chemistry or denature proteins, and thus may not be suitable for biological applications. “We wanted something that was very gentle,” said lead author Karl Böhringer of the University of Washington.

While temperature can be increased, to build a miniaturized PCR chamber, for example, “we want the ability to heat our samples to be separate from our ability to move them,” he said.

Importance: The chip is made of a material called polydimethylsiloxane (PDMS), which is “really inexpensive,” said Wang. “Each chip would cost a few dollars to make.  If you scale it up, it would bring [the cost] down to cents,” said Böhringer, making it ideal for applications requiring cheap, disposable materials.

The research proves that liquids of different viscosity can be transported using vibrations, such as from a cell phone, but Böhringer has not designed an application just yet. The chip would need to be outfitted with sensors or electrodes, which would be a good deal more expensive than the surface itself.

Needs Improvement: Different sized droplets require different frequencies of movement. For example a 5-microliter droplet will travel at a resonance frequency of about 80 hertz, said Böhringer. Once the appropriate frequency is determined for the liquid being used, it should be straightforward to control its movement along the chip. But being able to control the size of the droplets entering the chip initially may not be so easy on such a small scale. “We’d have to see how to adjust to the existing technology” of spraying or splitting droplets in order to make it work with the chip, said Böhringer.