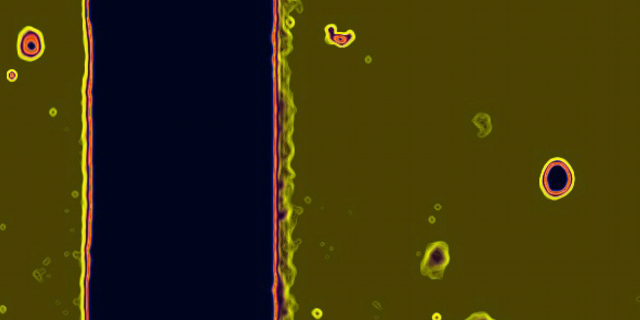 A false-color fluorescence image of the diamond surface. The small dark circular spots show nitrogen-vacany (NV) centers and the dark vertical stripe is the microwire used to apply the electromagnetic field.Courtesy of IBM ResearchThe device: A miniscule diamond flaw—just two atoms different—could someday enable researchers to image single molecules without resorting to time-consuming and technically exacting X-ray crystallography. The new approach, published today (January 31) in Science, relies on a single electron to detect perturbation in molecular magnetic fields, which can provide clues about the structures of proteins and other molecules.

“It’s quite an exciting breakthrough,” said physicist P. Chris Hammel at Ohio State University, who was not involved in the research. Previous nanoscale strategies worked only at cryogenic temperatures, but the new strategy would be much kinder to biological samples.

The work was inspired by magnetic resonance imaging (MRI), which uses electromagnetic coils to detect the...

To construct such a sensor, physicists Daniel Rugar at IBM Research and David Awschalom at the University of California, Santa Barbara, turned to diamonds. A perfect diamond, made entirely of carbon atoms covalently bonded to each other, has no free electrons and therefore no magnetic properties, explained Hammel. But a special kind of defect, known as a nitrogen-vacancy (NV) center, confers unique magnetic properties.

In an NV center, a single nitrogen atom replaces a carbon in the diamond lattice, right next to a missing carbon (the vacancy). Because nitrogen has one more electron available for bonding, the NV center confers magnetic properties to the diamond, which can be read using optical fluorescence.  “If you shine green light, it fluoresces brightly in red,” explained Rugar. “The strength of fluorescence depends on the magnetic state of the NV center.” If external nuclear magnetic fields—such as those emitted by other electrons and protons—are close enough, they can affect the NV center electron’s spin and the red fluorescent read-out.

To show that an NV center in diamond could be used as an atomic-scale sensor to detect nearby protons, Awschalom’s group synthesized highly pure diamond crystals containing NV centers near the surface. At IBM, Rugar’s team overlaid this with a 60-nm test polymer, and applied an oscillating magnetic field. When the frequency matched the protons’ resonant frequency, they found that their electron probe responded to changes in the protons’ magnetic fields, and this was reflected in the red fluorescence.

What’s new: “What they have is the first demonstration of looking at nuclear spins outside the diamond itself,” said quantum engineer Paola Cappellaro at the Massachusetts Institute of Technology, who was not involved in the research. “[They] really managed to do what many people had been trying to do, and detect the tiny magnetic fields associated with nuclear spins.”

Previous work relied on miniscule, magnetic-tipped cantilevers, said Hammel. These cantilevers, which responded to changes in magnetic fields by bending, could measure the magnetic field of a single electron, or about 50 nuclei, which are much weaker, Hammel noted. But experiments had to be conducted at very low temperatures and high vacuum—“not as exciting for biologists” who want to examine their molecules under more physiological conditions, he said.

By coupling light to their diamond sensor’s magnetic state, Rugar and Awschalom can perform similar experiments at room temperature and normal pressure.

The importance: Deciphering protein structure in the conventional fashion—by expressing, purifying, and crystallizing the proteins—is not easy, said Rugar. It is so difficult, in fact, that “most proteins in the body have no known structure,” he said. “If you could just take an [MRI] image, it would be a fantastic thing.”

Needs improvement: So far, the study is “just a proof of principle,” noted Awschalom. The researchers haven’t actually imaged any molecules yet, but simply detected their presence. Still, Awschalom said, “we’ve shown it’s not a completely ridiculous idea to detect external nuclear magnetic fields with one electron.”

Ultimately, said Hammel, the researchers will need to bring the NV center even closer to the surface and its target nuclei to get nanoscale resolution of complex molecules. But doing so without interfering with its properties will be a “serious challenge,” because the magnetic fields of extraneous nuclei—such as water molecules on the diamond’s surface—can influence the NV center as well.