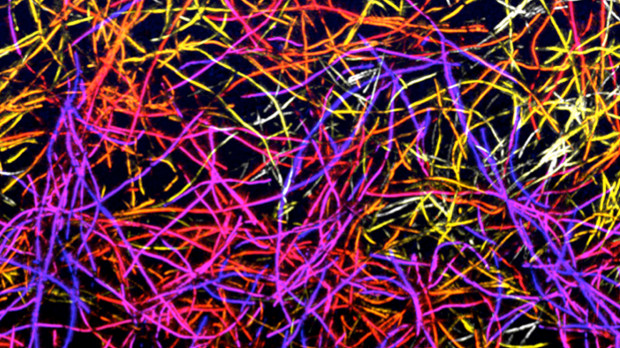 3D carbon nanotube meshJUMMI LAISHRAM The technique: Sections of spinal tissue placed 1 to 2 millimeters apart in a culture dish can reconnect their neurons with the help of an intervening carbon nanotube matrix, according to a study published today (July 15) in Science Advances. The 3-D matrix is also well tolerated when inserted into rat brains, the authors reported.

“The important thing about the paper is that, for the first time, it shows that a three-dimensional scaffold of the carbon nanotubes can really improve the connection between two networks in the spinal cord . . . in comparison with 2-D nanotubes or other 3-D networks,” said neuroscientist Jürg Streit of the University of Bern, Switzerland, who was not involved in the study.

The background: Immediately after a spinal cord injury, “there will be a scar that will physically block any kind of reconnection of the [original] fibers,”...

A variety of approaches to encourage spinal neurons to regrow are therefore being investigated. One such method is to provide a scaffold between the separated spinal sections to encourage the cells to connect.

Laura Ballerini of the International School for Advanced Studies in Trieste, Italy, who led the new research, believes carbon nanotubes might be a suitable scaffolding material because neurons seem to like growing on it. “This material has always proven to be extraordinarily good for growing neurons and improving their ability to reconnect,” she told The Scientist.

That’s probably because carbon nanotubes are both tissue-friendly and conductive, Benfenati explained. “They can stimulate electrical connections and electrical activity in neurons.”

Indeed, Ballerini’s team had previously shown that 2-D carbon nanotube surfaces were able to support neuronal growth, synapse formation, and excitability in culture. For such material to work in the body, however, it would need to be 3-D.

Ballerini and colleagues tested the 3-D mesh for its ability to encourage neuron reconnection between two separated spinal tissue explants in culture. When placed more than 300 micrometers apart, such explants can rarely reconnect on their own, explained Ballerini.

Without the scaffold, neurons emerging from the explants were organized into thick bundles. With the scaffold, on the other hand, the neurons grew in a more random sprawling fashion, following the labyrinthine network of the nanotubes.

The 3-D structure seems important, said Benfenati, because “the density of connections will be increased and therefore the regeneration potential and the strength of the connections with other neural cells will be improved.” Essentially, the 3-D mesh seems to increase the probability that neurons can find partners, he said.

A control 3-D scaffold made from a biocompatible, but non-conductive, polymer did not improve reconnections, the team showed.

The future: If the carbon nanotube mesh were to be used clinically, it would need to be tolerated by the body. Ballerini and colleagues therefore tested the material in living rats. They implanted meshes into the cortices of adult rat brains and examined the animals four weeks later. Both neurons and microglia had grown into the mesh, said Ballerini, and tissue inflammation was minimal.

This was an important “first step to show that there was some biocompatibility,” said rehabilitation researcher and neuroscientist Candace Floyd of the University of Alabama, Birmingham. “But, really, they should have put it in the spinal cord . . . that would be the next step,” Floyd added.