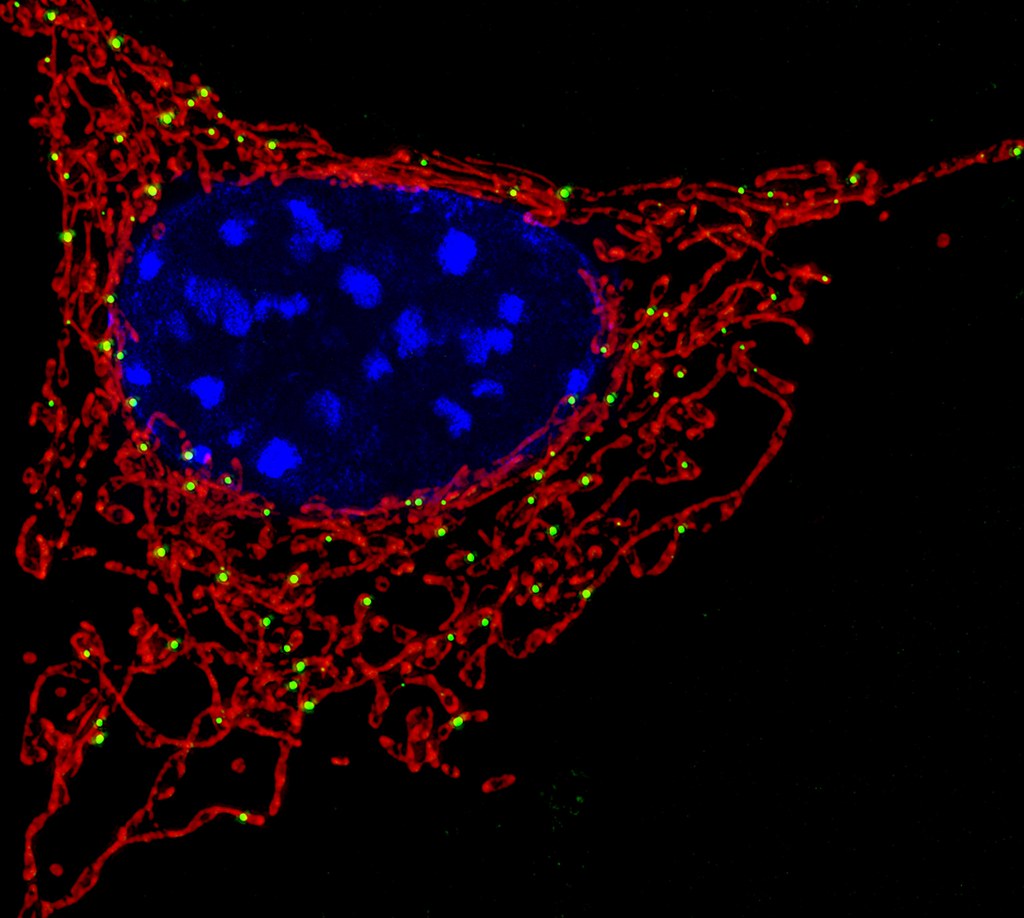 Mitochondria (red).FLICKR, NICHDThe technique: By keeping tabs on mitochondria, clinicians can distinguish healthy tissue from cancerous tissue and track cellular metabolism. But such subtle changes to tiny organelles are nearly impossible to detect in a clinical setting. A study published today (November 30) in Science Translational Medicine describes a new, noninvasive microscopy technique that tracks mitochondrial changes and could one day be used to help diagnose diseases.

“This is something that has been on everyone’s radar for a long time,” said Melissa Skala of the University of Wisconsin–Madison who was not involved in the study. “We’ve been developing this technology for some time, and hoping it could fill a niche in the clinic. [This study] exploits specific aspects of this technology.”

The technique revolves around the mitochondrial fluorescent enzyme NADH, which can be observed via multiphoton microscopy. By focusing on mitochondrial organization alone, researchers were able to distinguish...

The background: “At the moment, looking at mitochondria is really not part of what doctors do in the clinic,” said coauthor Irene Georgakoudi of Tufts University in Medford, Massachusetts. Although mitochondrial dysfunction has been linked to diseases from diabetes to cancer, current methods of visualizing the organelles involve the arduous tasks of removing tissue, staining it, and slicing it into thin sections for observation. “It’s a process that’s very invasive and very labor-intensive,” Georgakoudi said.

Because the task of visualizing mitochondria is so complex, Georgakoudi said, clinicians typically turn to the cell’s nucleus for early cancer diagnosis. “We don’t have any good ways of studying mitochondria in tissues, and certainly not in humans,” she said. “They’re not part of routine, diagnostic tool sets in the doctor’s office, because there are really not any good ways to do that yet.”

What’s new: The backbone of the new technique is NADH, a coenzyme involved in creating energy and synthesizing important biomolecules, and one of the few molecules in human cells that naturally fluoresces. Georgakoudi and colleagues exploited that NADH fluoresces most intensely in the mitochondria, and used lasers to take optical sections of mitochondria naturally “stained” by NADH. The team also developed an automated method to assess whether mitochondria are abnormally organized in each layer of skin tissue—one indicator of certain skin cancers.

“We are able to take very high-resolution images of individual cells without having to slice the tissue physically,” said Georgakoudi. “And then, because NADH is naturally there, we can take these images without having to use an exogenous contrast agent.”

To confirm that their technique works, the researchers tested it on patients with suspicious skin lesions, finding that they were able to distinguish healthy from cancerous tissue by examining mitochondrial organization alone.

The cost: Human studies employing a similar technique are already underway in Europe, Georgakoudi said, adding that her team hopes to see some variant of this approach used routinely in doctors’ offices within five years.

Unfortunately, “the laser we use to do this type of imaging is still fairly expensive, close to $100,000 in cost,” Georgakoudi said. Although less-expensive lasers may be on the horizon, the technology in its current state may prove cost-prohibitive for some facilities.

Because “this approach would ultimately enable a physician to make a diagnosis in real time, as opposed to having a patient go to the doctor, have a biopsy taken, and have a pathologist read it,” Georgakoudi said, it may well be worth the price.