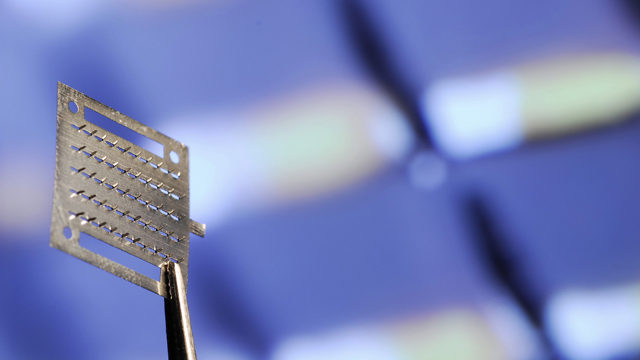 THE DEVICE: In the near future, your annual flu shot may not be a sharp jab in the arm but a sticky, spiny band-aid applied gently to your skin. Over the past five years, researchers at Emory University and the Georgia Institute of Technology have developed a dime-sized vaccine patch sprinkled with a hundred microscopic needles and coated with a vaccine solution. The patch, which could someday be self-administered, comes in two versions: metal or dissolvable polymer. It has successfully protected mice from influenza, and now researchers know exactly how the tiny microneedles elicit an immune response in the skin.

WHAT’S NEW: In 2011, the Emory-Georgia team demonstrated vaccine delivery via microneedle patches is often more protective than inoculation under the skin or into muscle, but they weren’t sure...

It turns out, microneedle immunization results in an immediate and dramatic local increase in cytokines under the skin, according to a paper published by del Pilar Martin and colleagues in the January/February issue of mBio. Cytokines are proteins that recruit important immune cells, including neutrophils, monocytes, and dendritic cells, to the site of immunization. The skin immunization also resulted in a prolonged presence of antigens—viral targets of the immune cells. “That creates a constant recruitment of [immune] cells into the skin,” said del Pilar Martin. IMPORTANCE: “It is the first real mechanistic look at how microneedle delivery of antigen through skin works,” said Thomas Kupper, chief of dermatology at Brigham and Women’s Hospital in Boston, who was not involved in the study. Kupper and colleagues recently demonstrated that a population of immune cells in the skin mediate a stronger immune response than T cells in the blood stream, which also supports the idea that skin vaccine delivery may be more effective than intramuscular inoculation. As scientists understand more about the early immune responses in the skin, they can expand use of the patch by testing other antigens, in addition to influenza, and observing the immune response.

Microneedle patch immunization could simplify vaccination programs in schools and assisted living facilities because it eliminates the need for trained personnel to give the injection, the authors noted. It could also cut risks associated with the re-use of hypodermic needles, which occurs in developing countries.

NEEDS IMPROVEMENT: If the team can develop a patch that does not need to be kept at cold temperatures, as most vaccines currently are, the method will be especially valuable for developing countries. “Hopefully, that’s the future for this type of delivery method,” said del Pilar Martin. But before the patches can be made commercially available, clinical trials must verify their safety and effectiveness in humans.

The Emory/Georgia Tech team hopes to begin a phase I trial with their patch in the next year or so, but they aren’t the only group pursuing vaccine patches: TremRx, founded by Kupper and colleagues, and Intercell vaccines, based in Vienna, Austria, are also pursuing techniques to deliver vaccines to the skin. Intercell has an ongoing phase I/II trial for an H5N1 vaccine enhancement patch and a phase II trial for a traveler’s diarrhea patch.