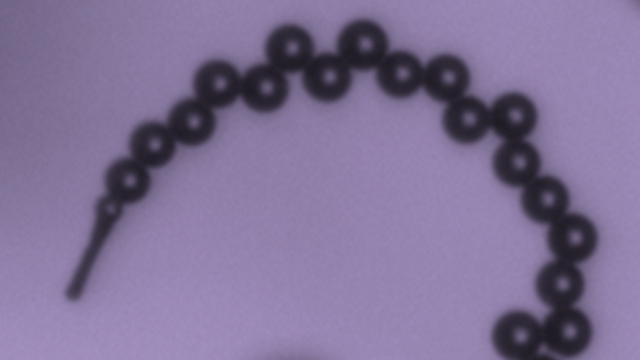 THE DEVICE: With the ability to power around a person’s gut on jet propulsion fueled by stomach acid, a new microrocket, designed by nanoengineer Joseph Wang at the  University California San Diego, could one day help surgeons root around for cancerous cysts or deliver targeted therapies. The 10-micrometer conical tube is lined with zinc, which reacts with acidic environments to produce bubbles of hydrogen gas that shoot out one end and propel the capsule forward.  With the surface of the tube covered with antibodies or outfitted with a camera, the microrocket could route to a specific target or image the inside of the stomach, said Wang.

Fueling the bubbling reaction with zinc “makes these engines more biocompatible,” said Schmidt in an email. In addition, because their propulsion depends on acid, their speed increases as acidity goes up, which could prove to be a useful indicator of pH in the stomach. The acidity, however, also impacts the life-span of the motor, which ranges from 10 seconds to 2 minutes.

IMPORTANCE: Previous work has demonstrated that these rockets can be coated with various substances that give them added functionality. For example, if they are coated with antibodies for a particular target, or with nucleic acids, they can be used to extract  protein or target DNA from a liquid medium, improving sample preparation by removing components of the washing step, for example.  They can also transport proteins and unload them at a particular location, which may prove useful for targeted therapies.

“You could think of them as tiny autonomous nanotools, swimming around, repairing things, or performing micro-surgery,” said Schmidt.

NEEDS IMPROVEMENT: Although researchers can direct where the capsule goes using a magnet, they are not able to control its speed, nor stop its motion in the gut. “There is an active research effort devoted to making small motors that are powered by self-generated chemical gradients,” said Ray Kapral a chemical physicist at the University of Toronto, which could bring these and other improvements to microrockets.