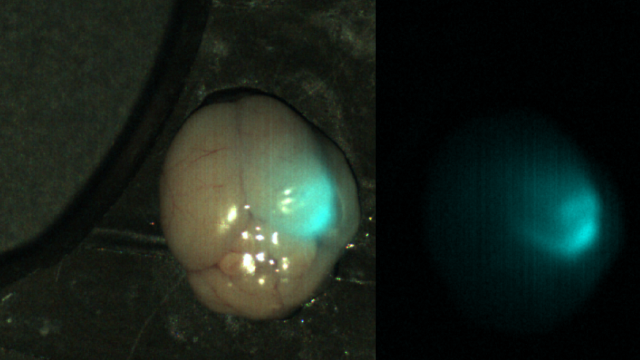 Image of a human glioma in a mouse brain, as captured by the updated version of the new camera system. On the left, a white light image is overlaid with an NIR image; on the right, a separate NIR image is shown.COURTESY OF PRAMOD BUTTEThe device: A new high-resolution, two-in-one camera system captures normal, white-light images of the brain, while pulses of near-infrared (NIR) stimulate the fluorescence of tumor cells labeled with an NIR marker called Tumor Paint. Overlaying the visible and NIR light images on a single screen provides a live film of where the tumor sits in the overall landscape of healthy brain tissue.

Testing the system on mouse brains that were implanted with human gliomas, researchers from the Cedars-Sinai Medical Center in Los Angeles and the Seattle-based firm behind Tumor Paint, Blaze Bioscience, confirmed that NIR marker had a high affinity for the cancerous tissue...

“The paper presents a proof of concept that showed it’s possible to go down to 100pM of this dye” and still be able to visualize the tumors, said Cedars-Sinai biomedical engineer Pramod Butte.

The significance: Removing tumors from the brain is tricky business. If surgeons don’t get all the cancer, it’s liable to come back. If they resect too much tissue, they’re likely to inflict irreparable brain damage. “Usually the tumors are close to eloquent brain, so you don’t have the luxury of taking margins around the tumor,” said Butte. “You have to be really accurate.”

Fluorescence imaging techniques, and in particular NIR-based systems, are quickly becoming a popular way to delineate tumor from healthy tissue. “The big story here is the emergence of this technology more than any one implementation,” said neurosurgeon David Roberts of Dartmouth-Hitchcock Medical Center in New Hampshire. “It’s a really, really exciting area because it’s so powerful.”

One advantage of NIR technology is that it can penetrate deeper than visible light. NIR imaging systems “can see at depth in a way that the visible spectrum doesn’t allow us,” said Roberts. “So that a tumor that may be beneath some tissue that would otherwise be missed, the NIR has the potential to let us see it.” Indeed, with the latest iteration of their system, Butte and his colleagues could detect a 1-mm tumor that was buried 3 mm deep into the tissue.

Needs improvement: The researchers are now working to reduce the size of the camera system to allow it to be integrated with the tools that neurosurgeons already use while operating on the brain. While the device, as published, was roughly the size of a, Butte and his colleague have already devised a new camera that is only 3 cm in each dimension.

“When this is fully developed, it will be able to get to anywhere that an endoscope or ectoscope gets to, and those are known for their ability to get close and personal to the area of interest,” said neurooncologist James Olson of the Fred Hutchinson Cancer Research Center in Seattle, who helped develop Tumor Paint and now sits on Blaze Bioscience’s board of directors.

Importantly, Olson added, this would permit much greater resolution than systems that image from afar. “The light waves scatter as they go through air space, so the further away you get from the tumor, the poorer the resolution is,” he said. “So the fact that this is an endoscope- or ectoscope-based system adds an additional element that I think is amazing for neurosurgeons.” In this same vein, the researchers have also increased the number of frames per second from 30 to 300 and are now full 1080p resolution at the higher rate, Butte said.

The team plans to start clinical trials for the imaging system later this year, after safety trials for Tumor Paint—which are ongoing in Australia—have been completed.