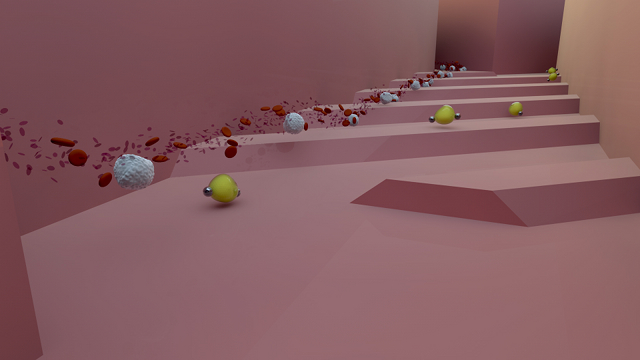 The Device: Researchers at Johns Hopkins University have developed a simple microfluidics chip to separate biological particles, like cells or proteins, by speed and location. Developed by graduate student Jorge Bernate with professor German Drazer, the strategy is a twist on chromatography, wherein separation of particles, like cells or peptides, occurs over time, with fast-moving particles being collected first and slow-moving particles being picked up later. Instead of relying on the single dimension of time, however, Bernate uses a strategy termed vector chromatography, which also uses space to separate biological entities.

The device relies a very simple and cheap force—gravity—to flow particles over an array of micron-sized bumps arranged “like rumble strips on a highway,” said David Inglis, who also researches microfluidics for biological applications at Macquarie University in Sydney, Australia....

What’s New: Previous strategies for separating particles by flowing them through a set of arrayed barriers, like the chip’s grooves, only relied on one type of separation. Some used physical barriers, like “rumble strips,” while others used force fields like those produced by magnetic strips. Bernate and Drazer’s strategy of applying a force field perpendicular to the physical grooves allows particles or cells to be separated based on more than just the size or magnetism. Furthermore, the duo was able to apply a unified set of principles that enable researchers to predict better how particles will respond to either type of periodic barrier, said Bernate.

Importance: Using both space and time to separate entities theoretically allows for higher-throughput applications, said Kevin Dorfman, who studies DNA dynamics (like movement through nanochannels) at the University of Minnesota.

Needs Improvement: Although Bernate and Drazer have only published experiments separating silica and polystyrene beads based on size and density, they’re currently working on using this strategy to separate red blood cells. Inglis fears that gravity, though cheap, is not a strong enough force to efficiently separate very small or light objects. In their experiments, Bernate and Drazer successfully “separated 4-micron beads, but for [particles] less than a micron, you’d have to wait a week,” Inglis predicted. And while their strategy will allow cells to be separated into a variety of categories, the tradeoff is that the separation may not be as clean as binary separation using only a single parameter, said Dorfman.