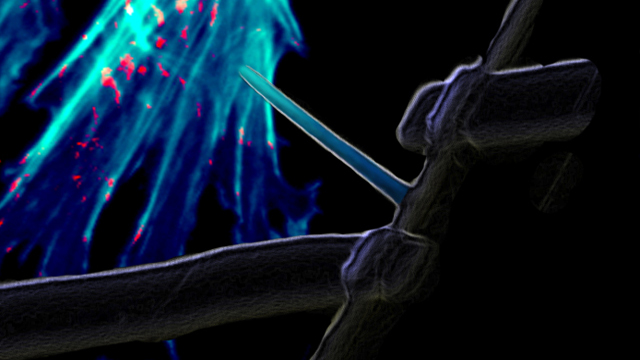 A false color SEM image of the BIT-FET overlaid with an image of a cluster of cardiomyocyte cells, illustrating how intracellular action potentials are recorded by the device L. ROBLES, OPUS DESIGN & X. DUAN, C.M LIEBER, HARVARD UNIVERSITY

THE DEVICE: It is not easy to record the electrical signals that pass fleetingly through neurons and cardiomyocytes. But with a novel nanoscale device developed by Charles Lieber and colleagues at Harvard University, scientists can record these action potentials without damaging cells and even probe sub-cellular structures like dendrites, according to a report published last month (December 18) in Nature Nanotechnology.

The branched intracellular nanotube field-effect transistor, or BIT-FET, joins a nanowire and a nanotube into a slim T-shaped structure that can be inserted into a cell up to five times in the same place without disrupting the action potential or damaging the cell. The tiny hollow nanotube, 50-100 nanometers... WHAT'S NEW: The commonly used “patch-clamp” technique to record action potentials relies on cumbersome glass pipettes that often damage the cells under examination. In August 2010, Lieber and colleagues announced a nanoscale probe, kinked like a bobby pin, that could penetrate a cell without causing too much harm. The BIT-FET improves on the nano-hairpin because it’s even smaller, said Xiaojie Duan, a postdoc in Lieber’s lab who led the BIT-FET project. “It’s just one teeny tiny nanotube, so it doesn’t do any harm to the cell.” And because of its size and shape, the device could eventually be used in a high-density array so researchers can measure the action potentials of a whole network of cells at the same time. The BIT-FET is also robust: after use, it can simply be washed in water and used again, said Duan.

IMPORTANCE: The BIT-FET is so small that it can probe sub-cellular structures such as individual dendrites, the authors reported, which are difficult, if not impossible, to access with existing methods, and could provide insights into neuronal communication. In addition, two BIT-FETs can be inserted into the same cell, where they independently record the same action potential. “The results are likely to have an outstanding impact on understanding the signal transduction among cells,” Zhong Lin Wang, a nanoscience researcher at the Georgia Institute of Technology who was not involved in the work, said in an email. “The work is a great example of integrating nanotechnology and cellular level biology.”

NEEDS IMPROVEMENT: To make the technology practical, the researchers will need to fabricate an array of devices to facilitate measurements of the inner potential of many cells, said Wang. The team also hopes to improve the signal-to-noise ratio of the device, which can degrade the data and is currently worse than that of glass micropipettes used in the patch-clamp technique, said Duan. Finally, the team is implementing a stimulation function to the device so that in addition to recording electrical activity, it can serve to activate cells as well, said Duan. “Every technology has the space to improve,” she added.