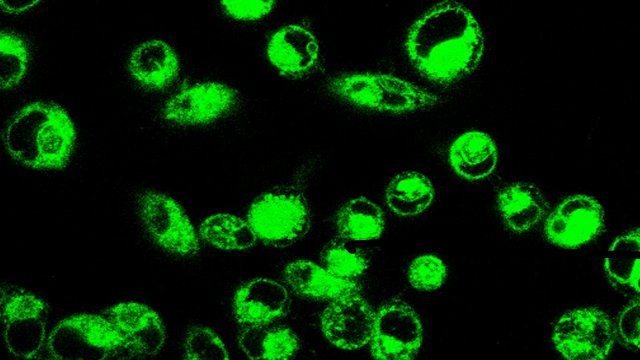 Fluorescent CLR1501 in pancreatic cancer cellsWEICHERT ET AL.The compounds: Phospholipid ethers (PLEs) are naturally occurring molecules that accumulate in the membranes of cancer cells, but not healthy cells. Using radioactive and fluorescent analogs of PLEs, scientists at the University of Wisconsin and from the firm Cellectar Biosciences, both in Madison, are now tracking and treating tumors in animals and patients. Their findings are reported today (June 11) in Science Translational Medicine.

“They’ve identified a type of lipid that is usually expressed by cancers but not by normal cells and they’ve taken advantage of this observation,” said Jeremy Rich from the Cleveland Clinic Lerner Research Institute in Ohio, who was not involved in the work.

Although researchers have known for more than 40 years that PLEs accumulate in cancer cells, it is not clear why. “Normal cells seem to metabolize them [PLEs] . . . break them down...

Because of the cancer-targeting properties of PLEs, researchers have for years been tinkering away to create analogs to which imaging or therapeutic “payloads” can be attached, explained Kuo. He and his colleagues have now used two such analogs—CLR1404 and CLR1501—to radioactively or fluorescently image multiple cancer cell lines, human tumors xenografted into mice, and even tumors in human patients. They have also used CLR1404 to deliver radiotherapy to tumors in mice.

The significance: Cancer therapies tend to fall into two categories. They are either broad-acting, such as chemotherapy and radiotherapy, or cell type-specific, such as antibodies that target certain cancer cells because of their high expression of a particular protein. A major problem with the broad-acting treatments is their indiscriminate killing of healthy and cancerous tissue alike. Targeted treatments, on the other hand, suffer from their specificity, said Kuo. For example, many patients cannot be treated with targeted therapies because they don’t express the target protein and, in those who are treated, there is a risk the cancer may evolve to resist the tailor-made drugs, he said.

PLE analogs, however, are both cancer-specific and broad-acting—they accumulated in all the cancer types Kuo’s team tested, with the exception of liver cancer. They even accumulated in stem-like cells from human glioblastomas.

“This is really the first time where we have a robust and reliable imaging correlate for brain tumor stem cells,” said Nader Sanai from the Barrow Neurological Institute in Pheonix, Arizona, who was not involved in the work. “And that’s very important because we know that this subpopulation of cells is really the worst group of actors in a tumor. They are the group of cells that are the most chemo-resistant, the most radio-resistant and . . . it is very difficult to target them when you can’t see them, so I think what this group has done is a very important step forward.”

Although these are promising results, the reagents could still be improved, said Kuo. For example, the radioiosotope used for treating the mouse tumors “is a broad cudgel,” he said. So, the radioactive PLE circulating through the body before it reaches the tumor could lead to toxicity, he explained. The team is currently considering different ways to package or activate the isotope to improve safety.

As for the radioimaging, said Sanai, “the resolution of PET images is relatively low.” He suggested that a higher resolution method may be important for detecting any cancer cells remaining after surgery or therapy. Indeed, this is part of the reason Kuo’s team is developing analogs for fluorescent imaging.

“There’s a lot of clinical work that needs to be done to optimize the imaging and therapy parameters,” Kuo said. But he is optimistic that the ongoing patient trials will help to iron out these issues.